From Belgium to Netherlands 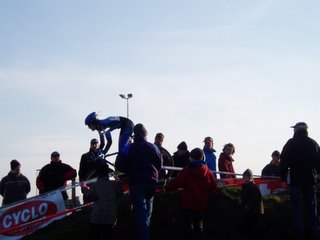 I am writing to you from Belgium to tell you that i was just offered a spot on the US National Team to race Cyclo-Cross World Championships on 29 January in Zeddam, Netherlands!!!!!!!!!!!!

THANK you all for your continued support and for all your emails you have sent to me!! It is such an honor to represent ALL OF YOU at the World Championships. I feel like it is a TEAM effort and accomplishment that i will be there at that start line flying the Velo Bella colors!! I will give it my absolute BEST to make you all proud!!

I have to apologize for not writing sooner. My internet access has been rather limited since i arrived December 23. Since i have access for the moment, i will try and make my travel stories brief to get it all in!!!!!

Every year that i have traveled to Belgium, i immediately get a nasty flu. this time i outsmarted Belgium by getting the flu before i came. By the time i got on the plane to come here, i was a total wreck – my head, sinuses, and ears were stuffy and all i wanted to do was cough myself inside out and sleep! Not a good way to start the euro cross season! But I was here for a job so i did what all cyclists do best – ignore my flu and carry on.

I am staying in a little town called everberg, located about 16K east of brussels and 10k from Leuven, my favorite town here. I am staying with Jan Goeman, a super great guy who also comes with a bike shop ten meters away!!

My first race was 26 December – Hofstade World Cup. Since i had very few uci points, i started almost last row. It turns out it didn’t make a lick of difference. the gun sounded and immediately jumped into top 15 turning the first corner, but soon afterwards I fell back to second to last place and stayed there for the first lap.

Turns out my rear wheel axle came loose and prevented the chain from staying on a sprocket -freak incident. After getting a new rocklobster, i crawled back up to 20th place. At the finish line, my pit crew of Jan, and his friends Ronny and Jenny were waiting to carry me back to the car.

It was amazing to hear all the support i had as a Velo Bella – although i think most of them assumed i was from italy or spain because they yelled, “venga, venga”. haha.

By my second race two days later, azencross in Loenhout, Belgium, most of the spectators figured out i was from USA. I heard a lot more – “amerika” comments and even a few “peanuts”. It is still odd for me to attend a “local” cyclo-cross race with 12,000 spectators who are lined up three-deep around the whole course!
Again, i had a fun start in the last row! (hey, the only place i can go is up!) After a few rounds of ditch jumps, bmx chatters and jumps, and a collection of the infamous belgian fly-overs, i ended up in 18th place. Afterwards, while the men were racing, I watched the spectators get plastered on beer and shots of a belgian-specific clear hard alcohol. hmmmm….something to investigate after Worlds!! 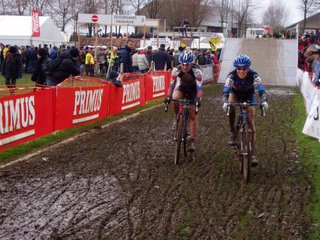 My third race was three days later in Hooglede-Gits World Cup, Belgium. What a cold, wet muddy day it was! All the americans likened it to Nationals in Providence, RI. Since I now had a few more uci points, i earned a spot in the third row (which i had to fight for since the other gals were physically pushing their way to the front row even before the gun went off.) After we turned the first corner into the mud pit, there was so much carnage i couldnt help but laugh – and laugh i did for the next fourty minutes. I ended up in 17th this time.

Luckily, they had showers available. As i walked to the showers, i was so cold that i couldnt imagine that i would be motivated to remove my semi-insulated soaked clothes to take a shower. But when i walked into the locker room, i was quite relieved to find it was a sauna! Since there were only two showers, all the girls doubled up to get clean. My shower partner was marianne vos – not like i was staring, but i did notice that i was not only twice her age BUT twice her width!!! After showering, i realized how unprepared i was for post shower activities such as drying off and getting back to the car (i will blame it on the flu – hahaha). was Luckily, Helen wymans of GB lent me a towel and marianne lent me sandals. Her feet were soooo small that i had to tippy-toe all the way back to the car.

Before leaving the venue, I picked up my paycheck – 22 euros (about $26) – i was thankful to have that money for gas since we had to drive directly to luxembourg for tomorrow’s race three hours away.

We arrived at the hotel at 9:30pm and had dinner in the hotel’s restaurant. The whole italian team was present in their matching tracksuits – very pro! But what was NOT very pro was their drinking habit! I couldn’t help but think, “that’s right, drink up so I can beat you tomorrow! hehehehehe” OK, so maybe it was only red wine and they only had about one drink per rider, but a gal is allowed to dream….

The next morning, it was still bitterly cold and raining outside – and inside. Turns out our heaters werent working. Unfortunately i didnt check my clothes that should have been drying all night until just before we left the hotel for the race. EVERYTHING was drenched, even my helmet -AND my skinsuit zipper was broken to boot!

The race was the first non-pancake-flat course since i arrived! The start was straight up for about one minute, then continued to climb in the woods. it was also the first course with some technical riding – a real mountain bike race in and out of the trees, complete with wet roots and rocks! The juniors were on the course the same time so it was hard to know if the person behind or in front of you is a man or woman since all these gals are in great shape, complete with boy bodies! On the last lap, I found i was in fourth place! Yipee! Every race i’ve improved on my placing. Now i must make podium at the next race…in three days!

Three days later and we are back in the car headed for Friesland, netherlands located way, way north in the boonies! We left at 6am, planning for a 9am arrival. The race was at 11:30am – plenty of time to pee along the way. What i didnt account for was getting lost about eight times. We also had to sit on the side of the road for fourty five minutes so Jan could take a nap because he was so sick that he hadnt slept the night before.

By the time we got to the race site, it was just after 11am. I got my race number, rode the bike to the start and off we went. In the first lap, I experienced so much pain to stay in contact with the top ten racers. I felt like I was violently awakened from a peaceful sleep! Once i warmed up, i started to pick them off until i got within striking distance of first and second place. unfortunately, I ran out of time and had to settle for third place. Part of me is disappointed that i didnt win but the other part is ABSOLUTELY THRILLED to be on my first ever European podium!!! Flowers and all!!! This one podium placing definitely takes the bite out of the $1,250 i spent on the flight to get here.

I am also thrilled that in the five events i have raced in a time span of ten days, i have moved up in my placings every time. Again, yipee!!!

Now that i have a few days before my next race is here (lievin, France World Cup 15 January), i am taking these days to fully recover from the flu (note – benefit of the flu is that i have a gorgeous set of abs from all the coughing) and rebuild my fitness for the two remaining world cups and World Championships. I am also
sticking around for at least one more race after world championships before heading back to california.

I hope to have better access to internet so i can keep you all updated on my life here on a more regular basis. By the way, i am learning flemish. i can understand more than i can speak, though. Since i havent mastered their very difficult
pronunciation of words, I am still talking in english since most understand it anyway. (it gets old repeating everything three times! haha)

THank you all again for being a part of my dream come true!!! I am just so happy to be here and I just cant wait to again represent Velo Bella at the remaining world cups and WORLD CHAMPIONSHIPS!!!!!! 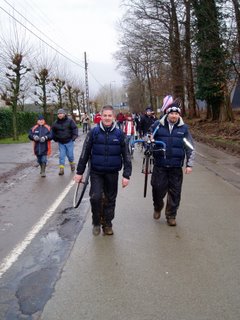 4 Responses to “From Belgium to Netherlands”