I knew the world cup race in Spa would be great, just because it was in Belgium (and because Norm was going to be here!). No one would be having a siesta in the middle of the day when we needed to get things done. We could eat dinner before 10pm.

The town of Spa was a cute, quiet town with lots of great restaurants and sparkling water. The race course was totally dialed with 40+ gated stalls for the feed zones. The race car track venue was sealed with gatekeepers making sure no hookers got in. Crazed cycling fans by the thousands. Little Belgian elves on every corner handing out chocolate (OK that one was an exaggeration but there WAS a Leonitas chocolate store in Spa).

But of course there was rain. It always seems to rain in Belgium. When we first arrived in Spa and saw our wicked B&B I actually felt bad for Bella Kristin and Sarah missing out. But when I checked out the course on Saturday I wasn’t so sure they would have enjoyed it.

It was a great course, but there was a LOT of mud. Now, I consider myself a bit of a mudder but this stuff was pretty much unrideable in big sections. On the downside of the race track it was slippery wet mud and above the track there was thick mud.

You couldn’t win. My Schwalbe Racing Ralphs were OK for descending but not so hot for climbing in the mud so I split the difference and threw a skinny Nobby Nic on the back. But even so, I knew I would still be doing a LOT of running. I shouldn’t have skipped those last two Frontrunners clinics before I left….

Along with his love and adoration, Norm brought over my full suspension Kona Queen Kikapu. I was a true rockstar pro racer with a choice of two bikes!! Hardtail? Or full suspension?? But it was a no brainer. Too many places to carry mud on the full suspension so I went with my Kula Lisa again.

Sorry Queen, you’ll get your chance but most likely not until we are back in Canada….

I pre-rode in the pouring rain and flatted as far away from the car as possible. After walking back, I sat in the car and tried to convince myself to go back out in the rain to finish my workout. I used the old “what would Lance do??” on myself (but after a week of staying with Kristin it is now “what would Tom do” because he is our new hero). Norm said Tom would be out doing a 5 hour Giro stage in this shit so I jumped out of the car to finish my workout. Thanks Tom.

Saturday afternoon it was pouring with thunder and lightning and the poor masters and juniors were out on the course. It was going to be a mess on Sunday. We stayed inside to watch the Giro and checked out the local bike shop Velodream to get a few things. Sunday morning our friend Pim showed up! He is a Dutch mechanic who we met a few years ago when we first came for cyclocross worlds.

Last year he volunteered to be the mechanic for the Canadian CX worlds team and he offered to help me out at Spa. He is legend. He got my bikes dialed but warned me that my front shifter should be changed after this race (insert horror movie forewarning music here).

Oh yeah it was raining again. 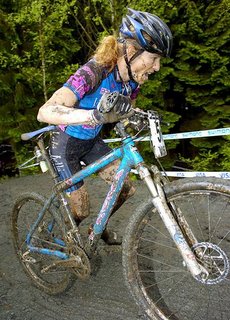 The race:
I had the BEST start of my life! Now I have had some great starts but this one was text book. I was a little worried about the big opening hill because I had seen racers getting dropped off the back during the Saturday races.

I guess they had blown up the big steep hill and had no juice for the gradual hill that lead into the mud. So I tucked into the middle of the group and got pulled up the steep opening hill in my middle ring. Legs felt great.

Once it tapered to a gradual hill I started moving into open spaces working my way up to Dahle’s wheel. Such a shame that white kit was going to get so muddy…..I had used very little energy and went into the mud 4th!! I could hear Norm going NUTS!!

Unfortunately on that start stretch I also realized that my front shifter wasn’t working – but I was in 4th at a world cup race!!

I kept my position through the singletrack but when I hit the downhill pavement section I kept trying to force it into my big ring so a few girls caught me. I seemed to be able to hold my position in the trails (mostly running) but would get caught on the fast sections dinking around with my shifting.

No problem – I was top ten at a world cup!

Well, until the last lap….I hadn’t been drinking much because I had taken both my water bottle cages off so I could run cyclocross style. It was a great idea “in theory” but difficult to find good places to access my bottle in my jersey pocket. Rookie maneuver.

I was pretty blown from all of the running by the last lap and got passed by 5 girls bumping me into 16th position. Norm was yelling at me to hold onto wheels but i was having a really hard time moving quickly. I had one last battle in me with Shonny Vanlandingham (Luna Chix) through the trees but she caught me again in the last feed zone.

I was even at risk of losing two more positions in the finish chute. because I had to sprint two girls on my tail in my middle ring which was now skipping. I barely finished ahead of them, bent over gasping. So it was a bittersweet finish. I could look at it as moving up to 16th from a 56th start position or moving back to 16th from a 4th position. Either way it was my best finish at a world cup mountain bike race and came with valuable UCI points. I’ll take it!

Thanks to all of our team sponsors Velo Bella, Kona, SRAM, Easton, Schwalbe, Zeal Optics (I lost my sweet pink Rush’s in the mud! Some crazy Belgian fan will be happy), Fox, San Marco, SIDI, Hincapie, Team estrogen, [email protected], Vanderkitten. Thanks to my sponsors Helly Hansen and Frontrunners. Thanks so much to Pim and Norm for being my mechanic and manager and feeders in the pouring rain.

photo by Rob Jones of CanadianCyclist.com