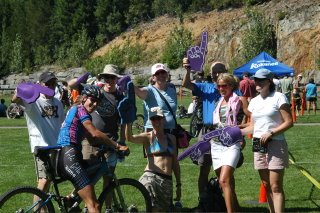 Foam fingers. You know the ones. The big foam hand with a single index finger raised in the #1 position. I don’t know what it is about them but I have always wanted to have one out there JUST for me. Bobbing in the air. #1, #1, #1, #1, #1. Well, this weekend at the Whistler Crankworx Canada Cup race I had an entire foam finger fan club!! It was the best! NINE purple and blue foam fingers bobbing up and down for Wendy Simms (written in glitter). It was my soopah foam finger fan club. Brought tears to my eyes (or maybe that was from the salty sweat stinging my eyes…). Either way, I have the best support crew ever.

All right enough bragging about my foam finger fan club. The race. Crankworx is a HUGE weeklong bike festival at Whistler that is mostly geared towards freeriding and downhill but this year they hosted us spandex clad XC geeks for a Canada Cup. Any race in Whistler is guaranteed to have some of the best singletrack around and this year was no different. It was the first race of the season where the terrain has justified pulling out my sweet Kona Queen Kikapu full suspension. Yeah! All of the top Canadians were still out west from Nationals and some of the US girls were up looking for UCI points so it was going to be a good race. The biggest factor was the heat. The temperature was 38C (100F for you US folks) and our race was at 1pm. Ouch. Time to double up the Cytomax. 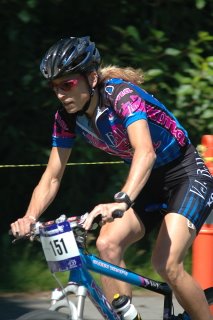 The race started surprising mellow. Mary McConneloug (Kenda/Seven Cycles) took the early lead but noone seemed to be challenging her. I think everyone was worried about blowing up in the heat. Eventually Marie-Helene Premont (Rocky Mountain Business Objects) took over and put it into her Olympic-silver-medal-gear, so us mere mortals were left to fight for the scraps. I had a great start and went into the single track fourth behind Alison Sydor (Rocky Mountain Business Objects). There wasn’t a lot of passing on the course – a trade off for the great singletrack that I was willing to accept. There was a big line of girls on the first lap but only the Xterra World Champion Melanie McQuaid (Orbea) squeeked by me and I managed to pass Sydor so, even score. The heat and singletrack started to spread us out by the second lap, so when I lawn-darted into a tree with my head, only Kiara Bisaro (Team R.A.C.E.) got by. It was my experiment at going gloveless to stay cooler – uhm I guess it failed. I jumped back on the bike but was a bit frazzled. No stars so I kept going (thanks for saving my gray matter Giro – unfortunately my Pneumo took one for the team) . The heat was starting to have an effect so I had to ride a bit more conservatively. I was drinking lots and dumping water on myself every lap (thanks to Norm & Hugh under the coveted BIG umbrella) but it wasn’t enough. I started to fade. I saw Kelli Emmett (Ford) coming for me on the last lap and managed to pull it together enough to hold her off but it wasn’t pretty. I finished 5th and went straight for the sprinkler. A dehydrated smile for my foam finger fan club and then I hit the shade. 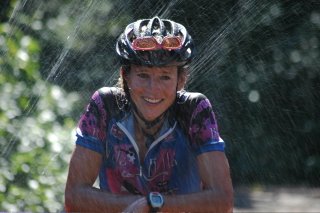 Thanks to my team Velo Bella – Kona and all of our sponsors SRAM, Giro, Cytomax, Zeal, Easton, Sidi, San Marco, Schwalbe, Hincapie, [email protected], Crank Brothers, Fox, Team Estrogen and Vanderkitten. Thanks to my foam finger fan club who braved the heat to cheer me on and keep me hydrated at their own expense: Norm, Alison, Jason, Catharine, Sharona, Heather, Mark, Rollin and Hugh . And thanks to my longtime sponsors Frontrunners and Helly Hansen – no thermal layers required this weekend…