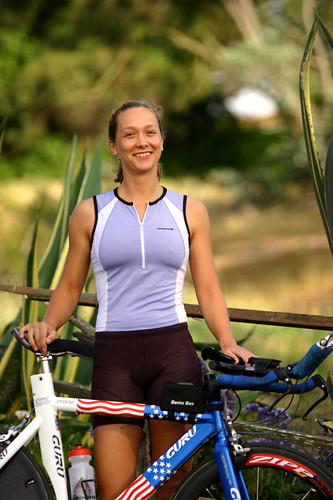 Race Category: whatever the beginner’s one is …

Petite Résumé: Moved to San Diego in 2003, bought my first bike in Feb. 2004 and did my first triathlon in May, placing 30th or something like that. Did some more races and finally took a podium spot (2nd) in October at the Mission Bay Tri. I bought a road bike in July 2006 just before I moved up L.A. with the hopes of doing some time trial-ing and crits that summer but it didn’t happen, graduate school was/is more intense than I expected! It will happen, though …

Goals: Try some cycling races like crits or time trials. Get first place in a triathlon (short distance, of course) and maybe at some point do an Ironman but that’s a big maybe.

Velo(s) I Ride: my first bike: Guru Chrono Tri Bike with the stars & stripes paint job. My new road bike is a Scott with a pretty plain black and grey design … I just found out they came out with a “girl’s” version with blue and red … if only I had waited another 2 months!

How I support by Bike Habit: Right now, I’m not … back in school to get my MBA which should hopefully lead to something to support my habit in the future.

Best Time on the Bike: Not sure … does that mean I’m not serious enough about this stuff?!?

Worst Time on the Bike: That would have to be Ralph’s Half Ironman in 2005 … it was pouring rain, and I’m talking massive down pour … I couldn’t see 2 inches ahead of me! But again, I don’t know the actual numbers.

My Motto: only play if it’s fun

Favorite Post-Ride Food: it depends … but usually something that comes in mass quantities.

Favorite Web Site: my own … wait, it’s not done yet.

Grab Bag: Not too many heart wrenching stories on my end … just looking for ways to keep myself entertained. Got inspired to try the sport from different people but it was my boyfriend who actually helped me with my first major purchases … bike & wetsuit. Since then, I’ve met many other endurance athletes and have learned and grown through them. I also started giving back by becoming the Beginner’s Race Director for the Triathlon Club of San Diego. It always feels good to volunteer … I recommend it to everyone!