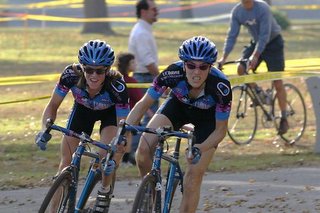 And in the racing action back east, Bella riders Barb and Christine worked over the lone Kona rider, Georgia, to finish 1st and 2nd at Highland Park. And, probably very happily scoring her first victory of the season, Christine snuck around Barb at the last corner for her first win of the season.

Congrats too to Erin for picking up a few more UCI points and to Lisa and Susan for spreading bella flair east coast style.

Congratulations to Sarah Kerlin for winning the FIAC National Championships today in Watsonville. She even did it without her purple tail and horns.

The women’s race was a 4 woman affair until Sarah broke away near the end of the race for the win. A surging Lauren Constantini was secondand Stella Carey (with gears) was 3rd.

The men’s race saw the first time this season that Andy and Ben faced each other. By the end of the first lap they had already established a gap on Justin. Ben launched a few attacks and soon was off and cruised in for a pretty good margin over Andy. Justin won the crowds though as he never had to get off his bike. Not only did he hop the running barriers, he also hopped and rode the run ups. The USGP organizers in the house did take note…

Henry Kramer outlasted a duel with infrequent but strong racer, Bryan Miller to take the win in the Masters 35+. Early leaders Rich Maile and Alan Coats succumbed to a rolled tire and a stiff back respectively. Rich rolled off for a DNF and Alan salvaged a 3rd.

Otherwise it was a pretty low key day. A fun fast, but long course, and DJ Grant on the speakers led to another pleasant day of cx fun and friends. If only I had remembered the battery for my camera.

Fortunately, John Blankfort did not forget his batteries. Check out his pics here

By: sabine ~ Filed Under Uncategorized ~ · 2 Comments 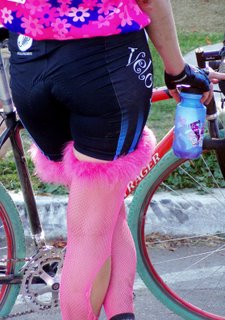 Just got this email from Heather:

“I’m busy drinking Molsons. I’m in Canada representing VB at Nationals : ) and hanging out with my Mum.

I won Masters W 30-39 yesterday in Hardwood Hills, Ontario (an hour from my home-town). Was the first time Mum’s watched me race a bike. I could hear her excitement as she cheered me on, it was very sweet. Race was great but there’s not much flair in Canada. It’s funny to think that last weekend I was watching a flaired-up Ben J-M race in a Bella kit.”

Yeah..Heath! Picking up a maple leaf!

More stuff on this:
Cyclingnews
Velonews

By: sabine ~ Filed Under Uncategorized ~ · 3 Comments

Looks like Barb won another one! This time it was UCI2 race, Lower Allen Classic. Bummer about Christine’s crash, but yay to Erin. She picked up some just in time UCI points. Here’s the Cyclingnews report and full results.