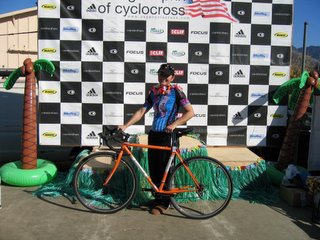 I decided not to race Saturday night after putting in too many road miles for my cyclocross legs to handle….so I cheered instead. We awoke to steady rain Saturday morning in Fresno, CA. But as the day went on, the winds blew in and it seemed like near perfect conditions for the cyclocross course; which by the way was re-set and all NEW this week.

Probably about the time our fearless girls were packing their stuff to head to Woodward Park, around 4pm, the big downpour began dousing the course with a fresh wash to make the puddles and mud really fun. Luckily the rain had ceased for the first race at 6:30p.m., this was the Women and the Beginner Men. There were five women and an equal number of men. The men were given a one-minute lead off. And there were the women: poised, and dangerous.

Our two VB girls were Liz McAfee and Pam Geisel. Liz sported pink fluff from her helmet and pink tassels from her …bar ends. In the last race, Liz was waiting for a good time to get going when everyone left her at the start line and she vowed NOT to let that happen again. But Saturday night she took the lead muscling her way around the first sharp turn and shooting out in front….it was BEAUTIFUL! Pam was hot on her heels though. As the ride progressed Pam DOMINATED swinging in first on almost every lap with a mountainbiker, close behind. With two laps to go, the MTBer pulled out in the lead. This course was definitely more friendly to mountain bikes than cross bikes with some obstacles easily jumped with a full suspension mtn bike where cross bikers had to jump off and on.

When it was overPam finished a clean close second to the MTBer and Liz was rockin in 3rd place. As their race finished, another downpour of rain showered the men inthe next race…so the girls got the best of that course!

Within the pack report
By Liz McAfee

I finally got my lighting system sorted out and I was feeling pretty kicky and secure about being able to see the landscape better [gotta say a 15W head lamp is best!]. Pam’s helpful night-riding tip has really helped a ton: look ahead and not down; and another tip: `to feel like I’m snowboarding in sections.’ The snowboarding analogy really connected with me.

I made a trip down to Steven’s Bikes to see if one of the boys could put on my new faboo Crank Brothers pedals. Nothing like changing something up right before an event [always a big no-no]. The boys were all chatting about the upcoming race and most seemed `amused’ that Iwould be out there racing. They did think it was cool though. I inquired about orange bar tape but Manager John was fresh out. He suggested lovely light pink. Well hey, pink and orange look quite nice together … right? We also added some nice silver tires that would help me to corner better.

I left for a few hours and came back to my gorgeous orange Julius [Lemond Poprad] all decked out. The guys were loving the color scheme! John said, “Hey Liz, if you will put pink tassels on the bar ends … I will give them to you.”Done! The boys just shook their head. John assured me that it was `cool.’ I added a fuchsia pink tail to my helmet thanks to Denise’s [Ramirez]Christmas gift wrapping [it was attached to my gift bag]. I was in myBella-splendor.

It was awesome having Lori and hubs Willy there to cheer. Soon-to-be-Bella Lisa T was also out there with Pam and me to race. I was excited that there was actually five women racing … and we are all over 40! Masters rule! I was so intent on the start line and listening to the Race Director counting down … I was not going to be left behind this time. I had noticed that a great many guys pulled their foot out of their clip to corner at the start of the last race … I knew I needed to give that a try. Must admit, I was surprised that I did get the lead-out … too bad I couldn’t get my foot clipped back in … and I was dropped again! ButI did get a lot further this time. I was beaming!

By the second lap I knew I had the skills to let it go a bit more on the downhill. The hard-pan was pretty dry so it was pretty safe to let it unwind, even in the dark. It was cool to have the lightening off in the distance … made the race even more memorable!

I was able to hang on the wheel of Lisa T and another gal. I lucked out a bit when Lisa bobbled near a turn and went down — I took advantage and over took her … weaved around her and bounced over the log. Strange feeling … I need to work on my competitiveness! I almost felt guilty taking advantage here. I just kept pedaling harder and harder and talking to myself about staying strong and staying aware.

This course proved to be much more fun for me … we could ride up the main hill and there were some nice downhills! There was a tricky part where the course took us through a large section of water … and then up a steep little bump. All the girls stayed inside the line like honest little competitors … and the guys went outside to get a better angle on the bump! Girls really do rock!

There was a sharp, steep descent to an abrupt stop at a log … the course then turned a sharp turn around and up a hill and then to another barrier. It was a decision whether to mount the bike again and then dismount … or just run the whole thing. After practicing just before the race, I decided to run this section. I felt it was much faster for me …I overtook one of the two MTBers on a straight section just before the first log dismount … I kept telling myself to pedal faster to get more of a gap. It worked! It also helped that a friend Gus came streaking around me and told me how awesome I was doing … not to mention all the cheers from Willy and Lori each lap!

I was so excited to have done so much better … this is my third night race and my fourth race overall. I am absolutely addicted to this! We have two more races: one more night and then a final day race at the end of the month. A couple guys who were warming up on the course had asked me whether the tassels made me faster [I was racing when they asked] … I mean, wasn’t I just a blur to them at this point? Of course they made me faster!

After the race I got a ton of compliments on my Bella-flair and I was a hit with the gaggle of little kids assembled to watch the race. I was called up to be interviewed … and asked to show off my bike. Unfortunately they thought I had won the race and I had to quickly correct them that I was actually third [that ended the interview rather abruptly]. I was quite pleased that the Bella jersey and Julius got on tape though! Afterwards I was treated to a lovely Sushi dinner with Lori and Willy… this just absolutely topped off the perfect Saturday evening!

Editor’s note:
Okay, it just makes my heart all crinkly to report that Julius is the Lemond Poprad that Liz McAfee won as part of the Cat C Women’s Challenge we held at the Nov 19th Surf City Cyclocross Race. Liz’s pal Denise reports that Liz loves Julius and is just hooked on cross.