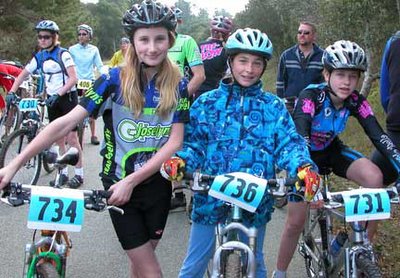 It was long, the course was tough, but I finished it anyway. My second-ever mountain bike race was eleven miles long in Fort Ord last Sunday near the East Garrison gate. I trained only one and a half weeks for this, and I didn’t want to do it unless there was a thirteen-and-under category. Unfortunately, and to everyone’s surprise, the race directors didn’t listen. They made the category eighteen and under.

We lined up, not knowing exactly where to go. Then, they told us to move back farther and let the others come through. After we were all lined up and my mom helped me start in the right gear, the race director blew his whistle and the first group went off. After a few more groups went, it was our turn.

At the blow of the whistle, we went off all in one giant spring. Then we separated and the group expanded into an angry mob of riders. I eventually took the back, trying to conserve energy. I soon realized how little training I had and how much training my friends had. It was a road start, but soon we came to a sharp right turn, into the trees and onto the trails. I rode with the group for a while, and then they all kept getting farther and farther ahead–soon I rode alone. I wanted to die on my first lap. There were three really hard hills. One of the old mean ladies wouldn’t let me pass. She kept moving in front of me every time I told her I was going to pass.

Later in the race, but on the first lap, I was riding over on a really bumpy trail when I shifted up, right as I hit a bump, and I lost my chain. I was frantically pedaling when I realized it. I had never changed a chain before by myself, only watched my dad do it. I jumped off my bike, looked at it for about two seconds, I looked around seeing if anybody was coming, then I quickly, like a instinct I never knew I had, I pulled the chain and put it on half way. Next, I jumped on my bike and I was off again.

Most people were really nice and cheered me on, even the grown up racers. But some racers, like this one older teenager, were really rude. Still heavily breathing and recovering from a hill, a stinky rotten teenager (which is what our family calls some teenagers) came blazing down the trail, almost knocking off the trail and not saying anything. He had no trail etiquette. I would have yelled at him, but I had no breath to speak. I just swerved to the right. At least he knew to pass on the left.

On my second lap was surprisingly easier than my first. The hills were still hard, but once I finished the race I was really glad I did. Even though it wasn’t easy, it was worth it. But, I will not race it again if they don’t have a thirteen-and-under category!