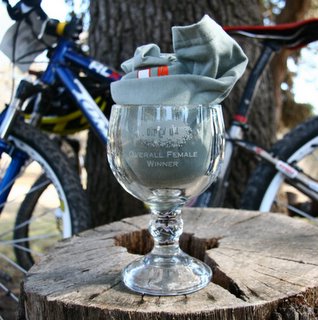 On Saturday, she raced in the “Dirty Duathlon” off-road duathlon (trail run/ mountain bike/ trail run), made famous by that other Texan, Lance Armstrong, who raced (and won) it in 2002 and 2003.

With temperatures in the low-fifties and strong winds and rain making the rocky trails slick and dangerous, many of the competitors opted out of the race, but Kiersten was undaunted and donned her thermal gear and soldiered on to become the youngest-ever woman to finish the event.

And not only did she finish… she won the women’s overall!

Afterwards almost all the competitors came by to meet her and find out who the “little fast girl” was. She was even invited to join a team and she replied: “thanks but I’m a Velo Bella”.
And only in Texas are bulls (not steers) and cow poop obstacles on the course!

On Sunday, she entered her first-ever road race: the Pure Austin Road Race, the first and largest road race of the year in Texas. Racing in the 12&U women’s division, but combined on the course with the 12&U men, Kiersten got a first-hand lesson in road racing tactics. She spent almost the whole race pulling five boys around the course until two of them broke away. She was able to catch their breakaway but, with legs worn from two days of racing and no one to pull for her, the tiny Texan couldn’t match their sprint for the finish line and finished third overall and, of course, first in the women’s.

Two days, two first-time events and two wins… what can’t this girl do?

And we couldn’t help but also post this cute picture of Kiersten’s “little” 9-year old brother Kees (also in his first-ever road race) outsprinting the competition for third place in the boy’s division… a little Tom Boonen in the making!

(Note to the flair/fashion police: temperatures at the start on both days were in the 50’s, and being as Kiersten considers anything under 80 degrees “cold”, and the only Velo Bella jersey she has is short-sleeved, she had no choice to wear her RLX gear.)