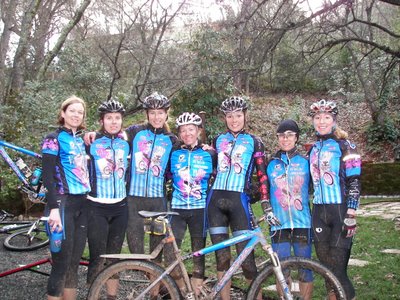 Two weeks since Training Camp and the Pro MTB team has opened the season with Shannon Holden’s VICTORY at the “Dash for Cash” on Whidbey Island, WA this past weekend. Shannon had a stunning “come from WAY behind” victory in her first MTB race since giving birth to the “Next Lance Armstrong,” Noah Holden, eight months ago.

Sweat pouring off her and grinning ear to ear, Shannon was heard to say , “This win is for my son, my husband, my teammates, Spokane, WA, and above all, for my Team Manager Alex who I can’t wait to split all my winnings with at Sea Otter.”

Always a stickler for trail maintenance, Shannon used her Team-issue new carbon SRAM X.9 rear derailleur to trim trail-side branches and twigs as she rolled through the first lap. Fortunately, the X.9 components are strong and ultimately Shannon’s collection of branches fell away on the second lap leaving her to focus on the growing hunger pains building within…

Wallowing in purgatory somewhere mid-pack while passing the veggie burger stand grilling-up tasty snacks behind pit row, Shannon realized she hadn’t eaten anything that morning being so nervous about her first race. Knowing she was in a race not only against her competitors but also her own fuel supply, Shannon kicked in the afterburners, dipped deep into her labor pain reserves and roared past the race leaders after a two-lap long chase on her way to a fresh steaming sandwich just past the finish line.

Team Manager’s Note: Even the Pro’s forget basic pre-race steps sometimes, but the difference between a professional and the rest is how one handles the adversity created by that mistake…

Winter Blues and Caribou
The rest of the Team is hunkered down in snow or waiting for snow to arrive. Sami Fournier continues toward her Wednesday move date with steadfast focus and courage despite all manner of obstacles; and all her teammates wish her a safe journey down, across, up, down, around and over the US as she and Jon make their way to a new adventure in Oregon.

Don’t tell the Republicans, but while the rest of us have been freezing down here in the States, Wendy has enjoyed warm sunny weather up in British Columbia for weeks and has put in some serious training, including culturally aware cross training events like seal chasing; running with the reindeer while dutifully wearing her VB-K tri-suit; as well as practicing Super D with a small herd of barely domesticated Caribou on the hill behind her property. Wendy is primed for Sea Otter and an exciting season…

All is well in the build towards Sea Otter and our first major Team race of the year. We hope to see LOTS of pink and blue running around Laguna Seca in a few weeks!