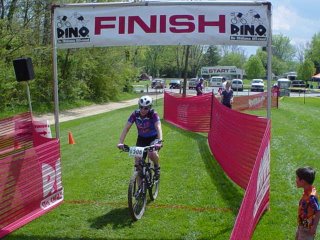 Its been a long day. I got up at 7, mostly because I was tired of trying to sleep. We left for the race 9:30 and got there around 10:45. I was very anxious because I wanted to ride two warm-up laps before the 12:00 race started.

I registered and changed quickly, and I probably would have had time for two laps, but after I saw the course I figured the second lap would hurt my confidence instead of helping it. I had been told that they course was easy and I wouldn’t have to ride over any logs (haven’t managed any decent wheelies yet).

The first and last miles of the 3 mile loop were highly technical and the lap had four logs. I had to walk most of the last half mile because it was too technical for me and I was really shaken because of all the men coming up behind me in warm-ups. By the time, I made it back to the car I wasn’t happy. More like scared out of my mind.

I had an hour of my husband’s expert race and an hour of sitting around to calm down. Then another setback.

For months I thought that I was in for a one-lap race because that’s what beginner women have always done in the past. I always thought a 3-mile bike race was kind of ridiculous, that’s what I’d been visualizing for months, so when I found out that we were doing two this year I wasn’t happy.

By the time I got to the starting line the nerves had cleared and a sense of resignment had set it. “Just tuck in and do it,” I thought. There were three women in my class. We filed into 1-2-3 order right from the starting line, with me in the middle and stayed that way for rest of the race, just spreading out more. The third place girl dropped out, so I was technically last, but since I was legitimately pulling away from her I consider it a small victory.

It was the winners 4th year in beginners, and the other women’s second, so as the only true newbie in the group I think I did okay. My lap times were just slightly slower for two laps than I expected for one, so I guess that was okay. My only real disappointment was have to walk a good portion of the course. I’m going to a skills clinic next weekend, so with that and plenty of practice riding I should be a lot stronger technically by the end of the season.

Today was just considered a practice race and didn’t count for points or prizes, so I didn’t get to stand on the podium (really disappointed). I thought I might be able to move up to sport after a couple of races, but it looks like I’m going to stay a beginner for the rest of the season.

There should be a bigger field at the real races and I guess my new goal can be to become a fast beginner and let other people race beginners for year number 5 (you have to upgrade if you win the series). You gotta have goals, right?

Finally, one last bit of info. My average HR for the race? 189 for a 50 minute effort. I’ve always had a fast little ticker, but wow.