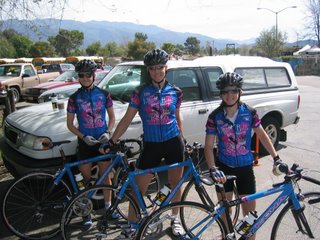 Three of the Velo Bella -Kona gals went down to race the Garrett Lemire NRC crit.
Kele Murdin was team captain with support from Jane Ziegler and Jen Joynt.
The event was not too eventful, and no breaks happened, so it went down to the sprint and the gals missed out.
Jane did make a move on the front to pick up the pace as it was slowing drastically and the big teams were forming.
See Janes photos in cyclingnews:

Thankfully the sun was shining as the endless weeks of rain and dark skies were starting to get on us, and it was a much needed break!
Kele and Jane did Amgen crit the day before, you got to read her blog on whats buggin her!