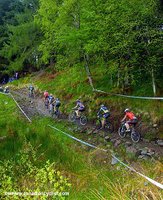 Scotland
Well this was our first trip to Scotland and we were pumped!

We stayed with Scots Gordon and Elliot Jardine (friends of the family) on Shieldhill for a couple of days before and after the race. They were AAA hosts and have the perfect mascot for our team – a German Shepherd named BELLA. They were a wealth of information on Scotland. They knew everything from where Harry Potter was filmed to wave action as a potential alternative energy source for Scotland.

The country has some amazing terrain with big green rollers filled with sheep in the southern part of the country to bigger harsher open mountains in the Highlands. Its all very rocky and looooooong rock walls scatter the country. We will have to come back to check out more. But….when I come, I will bring every possible layer of Helly Hansen gear I can stuff into my bag because the weather changes FAST. The key here was layering and waterproofing.

Mountain biking Scotland
Just before I left Canada I read an article in a mountain bike magazine that rated the best trail building places in the world. Scotland had apparently bumped BC out of the number two spot. I didn’t think that it was possible (I DO love our BC trails) but after riding at Glentress on Wednesday and Fort William this weekend I have to admit that I was pretty impressed.

The trails were built to shed rain (and we saw LOTS of it) so the race course was in amazing shape considering….. There were great trails for all levels, the different routes were all colour coded and marked clearly, showers and washrooms were available at the base and the HUB cafe had wicked snacks for after your ride!

After we rode Glentress Norm said it all too well “do you think if we dumped some friends off at our local trails they would be able to have a wicked ride like we just did?” probably not. But I guess in Scotland its all run by the Forestry Commission so its done with a master plan. And as the Scots say they have done a crackin’ job.

Norm asked me what I thought of the Fort William course after I pre-rode on Thursday afternoon in the last bit of sun we would see for 2 days. LOVED IT. Even though it had poured on and off for the past week the course was mostly rideable (except one section through a clear cut) and it was a lot of fun. It had something for everyone. A big 3km fire road climb on the first lap for the mountain goats. Really technical descents for the heavy weights – with lots of passing places connecting them, and an open flat area at the end for those who play tactically.

It would be tough and challenging course to race on but it would be a blast. 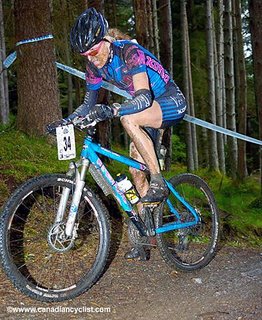 I was feeling really good about this race.

I seem to race well in challenging conditions and as we all huddled together at the start and the skies opened up I almost started laughing. It was kind of comical. A bunch of scrawny cyclists from around the world soaking wet in spandex about to rip it up in the mud.

As I looked around I saw disgust, fear, shivering, focus but no one else was smiling. Well I shouldn’t have been so smug. The start “gun” went off, which was a weird beep so half the group started and the other half (myself included) hesitated for a second because we weren’t sure if that was the start signal. There would be no “game off – REDO”, so we got our shit together.

Within seconds, probably about 100m off the start line, I heard some chick screaming bloody murder and looked over to see two girls dominoing right towards me. I tried to move out of the way but I was boxed in by a rider up front and a ditch to my left. They took me out. I jumped up right away and wrenched my poor Kula Lisa from under the tangled mess, watching two girls from behind add to the pile up.

I took off to catch the tail end of the pack. Thank god. I couldn’t imagine trying to chase up that 3km hill on my own. I assessed the situation.

My original plan had been to climb steady and go into the technical section in the top 15 so as not get caught behind the frass. That plan had gone to shit. I was stuck behind at least 60 girls that may or may not be technically skilled. I didn’t want to blow up on the long climb so I just got into a groove and steadily picked off riders. I didn’t go kamikazi on the climb but I made up at least 20 spots just riding from wheel to wheel.

When we hit the first technical section it was an on-off track stand the whole way down. Not exactly going as planned. Don’t panic its a long race. When we hit the clear cut I realized that two seasons of tree planting in Northern BC had given me the ability to bound through red rot faster than any of these girls that had been training all summer. I picked off at least two riders every lap in that section!

I chased and chased and chased, picking off girls throughout the course. I have to admit its better for the ego than falling backwards from a good start like last week in Belgium….I was feeling good and had moved into the top 15 on the last lap.

I had passed all the US girls and even two fellow Canucks. I thought I had dropped Alison Sydor (Rocky Mountain Business Objects) for good but I should never count her out of the mix – she is a wiley one. Kiara Bisaro (team R.A.C.E.) was on my tail for the last open stretch and I stupidly towed her around thinking I was strong and it was just the two of us. Sydor was nowhere in sight. Just as we were coming up to the last singletrack before the finish, Bisaro pulled ahead so I think ” I will just take a quick rest and sprint for the trails”, when Sydor comes out of nowhere sprinting with a Kiwi on her tail and suddenly I have lost three spots and am the last into the trail. How the hell did that happen? 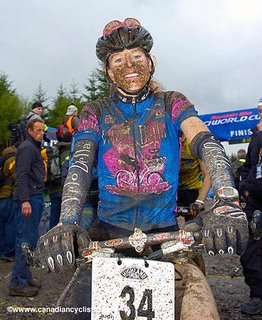 I stay on my wheel in my big gear hoping I can pull a good sprint out of my ass but coming off the trails last puts me in a horrible spot and I can’t do much with it. Another bittersweet 16th finish. Happy with a strong comeback performance but mad at myself for being so tactically retarded.

Mud in every orifice, I admit to myself that I have had a solid Euro World Cup effort and I can go home satisfied with my results but still wanting more.

Thanks so much to all of my team sponsors Velo Bella, Kona, SRAM, Easton, Schwalbe, Zeal Optics, Fox, San Marco, SIDI, Hincapie, team Estrogen, [email protected], vanderkitten. Thanks to my sponsors Helly Hansen and Frontrunners. Thanks to the Jardines for being such great hosts. And thanks to Norm who has been hanging out in the pouring rain with me as my mechanic, feeder, manager, training partner and super fan!