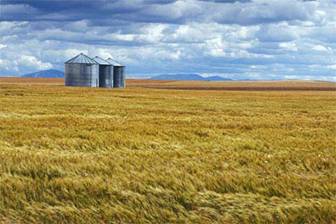 I SO apologize for my slackness in getting this out for a fun race from last weekend.

After a windy and rainy team triathlon the week before, I had gone out on Wednesday to test my legs on the hills, as Belt would have some. Bad. Very bad. My legs felt like logs and I started panicking. Fellow Bella Renee’ told me to think like Marco Pantani when he was the Pirate and dance on the pedals. I decided I’d be the Pink Pirate. Arrggh.

I took the mountain bike out on Thursday and felt better. Much better, but still panicking. Gotta love newbies for panic.

Let me start by saying there is nothing like spending the night before a race 20 minutes away from the start at a friend’s parents ranch with cows lowing in the background and sleeping on a big ole feather bed. Oh my. Didn’t want to get up and face the pain.

Belt, MT. Population, like 600. You are in the middle of cattle, wheat, and wind country. They have a wind farm near there that they shut down from time to time because it’s blowing too much. Ya know the American anthem, those “amber waves of grain?” There’s a REASON the grain is waving.

I figured some carbo loading on Friday night with Jennell’s mom’s spaghetti would do the trick. A big breakfast Saturday morning was scary, but well worth it. And then there was the banana bread.

Our kicking tail Montana Bella Zoe had been receiving contraband banana bread from Coach Jeff’s wife every week… I was starting to see a trend, so I ordered up my own loaf. And ate most of it on the way down Friday. I wasn’t taking any chances (or maybe I was!)

Belt is an Omnium race with an uphill time trial in Centerville (population of only 25) in the morning and then a 40-mile road race in the afternoon. My friend Jennell was nervous (her first race ever), but flaired out with some very cute hair accessories and a flashy jersey. I was very proud.

The uphill time trial had a lovely headwind. I was trying to decide between lighter wheels and a 23 or slightly heavier wheels with an extra cog. Hmmm. Someone said lighter wheels definitely. I cursed him all the way up the hill in my 23. Grr. And I really didn’t feel the power of the banana bread nor did I feel like the Pink Pirate. Arrgh…

Bellas Zoe and Renee’ did – Renee’ scorched the competition with a 21-minute time and Zoe took second. I managed to not be last. My friend Jennell is starting to get frustrated.
We ate lunch, watched a cattle drive, and drove to the start in Belt. I had calmed down some at this point, talked some tactics with Renee’ and Zoe. Although, since my goal is still to hang on with the front group to the finish, I don’t know if tactics are where I should be just yet. 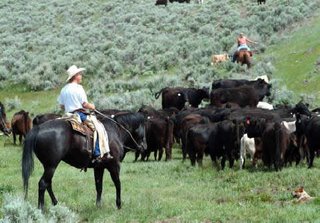 Eleven women rolled down the road into a lovely headwind. The pack started heading up the first hill, and I hung on for dear life. Kept thinking Billy Idol “Dancing with myself.” Arrrggghh… I was stoked. One girl went off the front about 50 to 100 yards in front of us working with a junior, and sat out there in the wind for a long time. They eventually sat up and realized we had just been sitting there for awhile. Zoe and Renee, as well as a rider for Great Divide cycling were absolutely AWESOME encouraging me when I was really feeling tanked, as well as helping me figure out what to do.

The wind was every which way and you name the pace line style and we did it. Pace lining at 14-15 mph is rough stuff. But the wind was absolutely brutal. At the turnaround, there was much rejoicing. Yayyy.

A tailwind for the next 15+ miles – woohoo!! Oh, but then we had to go back over that big hill.

I started taking to being as close to the front as possible on the start of the climb, hoping to still be with the group, albeit at the caboose, on the top (arrrgh). It worked on a lot of the rollers. We got to the big climb, which had a short pitch and then a longer grind. I made the short pitch, but then couldn’t hang on for the longer grind. It was only 8 miles to the finish, so I was pretty happy to have made it that far with the front group. Jane with Great Divide was with me and we worked together to the finish – never letting the other girls out of our sights. When it came to the sprint on a slight incline, I went to stand (remember, I love to sprint), and my legs literally gave out from under me. Ah, the price you pay for being a pirate!

There would be no standing, no sprinting and Jane took the well earned 6th spot. But I was there. That was worth more than any sprint. Each race I get stronger, feel more encouraged and am ready to take on the next one.

Overall, Renee’ came in 3rd, but 1st in the CAT3s, and Zoe came in 4th. The photo has the tippee top of Renee’s helmet as 1st and 2nd place for the women came down to a sprint. 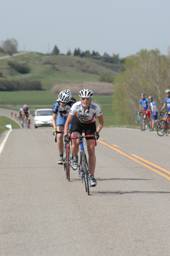 And my friend Jennell? She lost the front group not far from the start and sat in the wind by herself on the way out, but her competitive drive kicked in (she said she got really mad) and she passed people on her way in – and didn’t finish last. So I’m really hoping that she’ll come back out and race. But really, that she’s still my friend.

Until next weekend and the Cow Pie Classique mountain bike race. Moo.