It’s been months since I wrote a race report, so to get started I stumbled over to Starbucks a few minutes ago. JoJo whips up lattes across the street from my place of work, but she isn’t back from her little vacation in Taiwan yet, so I had to get my fix without the giggles and gossip this morning.

Cat’s Hill was my “Welcome Back to Racing” event of the year, after a long long winter spent in hibernation. Jumping into the race scene with an event like Cat’s Hill is a wake up call akin to diving off the end of the Santa Cruz Pier for a 6am swim in March…. but I’ve been known to do that also, so what the hell! These are things that put the spice into life, or the Loca in a Bella as some might say.

On the start line I said hello to Jen Joynt, my only teammate for the day. I’m glad she made it out after a tough week at the Gila! Observing the sea of green and yellow all around us, we agreed to play it mellow, letting others set the tone while we conserved our energy. Off the gun I made it a point to get near the front, not wanting to get caught up in any mayhem that might bring an early end to my season debut. The first few laps went well, until I made the mistake of glancing at my watch…. only 11 minutes had passed! I tried in vain to comfort myself with the thought that I was already one-sixth of the way done. Ha! I gave myself over to another 50 minutes of agony and suffering, though my body and mind had grown unaccustomed to such abuse.

The Cat’s Hill course features a punchy one block climb of about 20 percent, and rough, deteriorating roadways around the rest of the circuit. While the broken pavement on the course is ugly, the real danger I think comes in mechanical malfunctions on the hill itself. Jen dropped her chain on the hill and that was the end of her day, unfortunately. At one point on the turn approaching the hill I found myself sandwiched between two riders and the three of us bumped handlebars as I was shifting into my small ring. The chain didn’t move and I frantically fumbled with my levers, already having missed my opportunity to make a smooth shift. Desperately I threw my chain onto my 27, and prepared myself for a grunt up the hill in my 53×27 from a near stand still. Luckily, a few pedal strokes up, my chain jumped onto the 39 with a very loud grind and crunch. Paul Sadoff and Matty Wabbit were right there on the sideline to witness my abuse of my machinery – not the sort of thing I wanted to do in front of my framebuilder and my mechanic! Ooops. Sorry you had to hear that, guys.

I got the gears turning and I was on my way, but the efforts were building up, as was the crusty salt and drool on my face. I know I’ve looked sharper in a race, and felt snappier too! It is mentally discouraging to feel that your feet are stalled two beats behind the dance steps, and that’s where I was on the hill all day long. Without my rocket boosters I went into survival mode, searching for the fastest line through each corner. 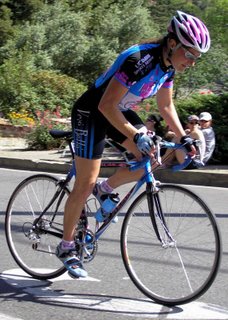 I had to move from inside to outside of the pack as we moved around the course to keep my momentum and savour every small moment of rest. I knew I was at risk every time there was an attack, so I remained attentive. Those laps where I let my concentration slip saw me creeping sloth-like over the top of the hill, scrapping around the backside of the course to regain a solid position before the next round of punishment. I was grateful for the many loud cheers from the large group of Bella fans atop Cat’s Hill, and I kept pushing for fear of disappointing my supporters if I slipped off the back for good. It is a big responsibility being the lone Bella representing on the course with at least a dozen Bellas and Fellas drinking, yelling, and snapping photos on the sidelines, so I dug deep and did my best!

Christine Thorburn soloed off the front with just a few laps to go, and a chase group soon separated themselved from the main pack, where I was content to wait for the final lap sprint. Christine stayed away, but the chase and the main pack came together for the sprint. I was lukewarm over the final rise, and did what I could to come up with 16th place. I’ll take that finish and be happy with it, remembering that just a year ago I DNF’d at this race, which marked the end of my season due to fatigue. Now I’m back a year later, in great health and a promising season just begun. The suffering feels oh-so satisfying this time!