Hi, Belli (I took a year of Italian in college, and one of the few things I remember it that the actual plural form of Bella (beautiful woman) is Belli, unfortunately pronounced “belly”…)

We the Central NY contingent just completed our local Syracuse Race Weekend event – a road race, street sprints later that evening in downtown Syracuse, and then a crit on sunday. At this point, there are four Velo Belli (ok, Bellas, I know you all like that better) but after the weekend, I think there are three more joining us.

Amy Kneale, mom of 3 (!), is a new 4 and probably very soon to be 3. A former extremely competitive runner, she’s been bitten by the bike bug and is just having a ball and great success to boot. Our other 4s are Janet Olsen, mom to Lars, who has done triathlons, is big into mountain biking and who has set some goals for racing for herself before she turns 50 (a long time from now, wink, wink) and Sue Atwood, animal lover and caretaker, also a hard core mountain biker, sneaky street sign sprinter, and as yet, I think, woman of untapped potential. 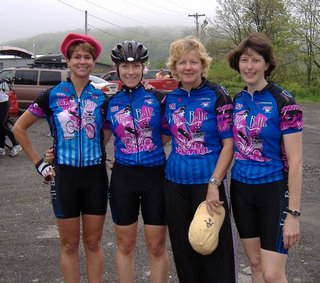 In short, my races were not worth of a lot of discussion. I had to do 60 miles and twice up a loooong, painful hill before the short finishing hill. Suffice it to say, I was dropped from the pack on the first climb, but worked with two other women to catch the pack on the second lap, yay, but darnit, was dropped and this time for good, on the hill climb again. Legs were in serious pain.

Amy’s, Sue’s and Jan-o’s group had 33 miles, Amy finished an impressive 2nd, Sue and Janet working from a bit back, but it was their FIRST race! And they left smiling, despite the miserable climb.

The weather was a bit dreary too – typical NY overcast, slight drizzle and a headwind like crazy for the last 6 miles. (Ok, Janet wasn’t smiling as much as Sue, but she was perkier the next day.) We (the Onondaga Cycling Club) have put this race on for years, and some of us love the street sprints because they’re just different. Others (a lot of the pros) don’t like it because if you don’t do them you cannot win in the GC, and they’d rather go home and shower and get ready for the next day’s crit.

Nonetheless, you never know who will be good at this event, because it’s really different than just sprinting in a race. There’s not much time to “ramp up”. Many of the bars and restaurants are open and there are spectators sitting outside dining while watching all the lycra-clad, skinny people zipping up and down the road.

Of the 4 of us, I think Sue had the most impressive results. I had no idea that she had that in her, she’s very unassuming. Who knew?!

Last event was the crit – in a park in a residential area of the city of Syracuse. The weather was very hot and sunny for us New Yorkers, in the 80’s, where we had, believe it or not, SNOW falling exactly a week before. This crit is a great crit for first timers, because there are no sharp turns and it’s actually a very beautiful setting with a fountain in the middle. The really horrible thing is the city gets the public pool ready, and the water is glistening and beautifully inviting, but they torture the kids by not opening it for two weeks!

After my race, I helped corner marshall at a spot with no shade, and that &%$! pool right in my view. In any event, the 4s and 1-2-3s were on the course at the same time, as well as the somewhat squirrely juniors; we were sent off a minute or so apart. My great excuse is #1 that my legs were toast from the day before and I am using gearing that isn’t working for me and #2 I got boxed out by the juniors when my group was passing them, and I couldn’t bridge the gap back to my pack…

I worked for a brief while for a friend and teammate on a team I raced with last year who was on a solo breakaway, but she really didn’t need my lame pulling for more than a minute or so.

Eventually the pack caught me (or more aptly, they lapped me) and I jumped back in and finished with them. (So I don’t sound so pitiful, there were two others who were dropped. Do I sound defensive?)

Amy’s and Sue’s group of 13 stayed together for a while, but also then broke up (I can’t imagine how difficult it was for the lap counters – we also had 3 different numbers of laps to do) and Amy was with her front pack while Sue was back with a couple other women. Amy ended up finishing 4th and Sue 9th I think. 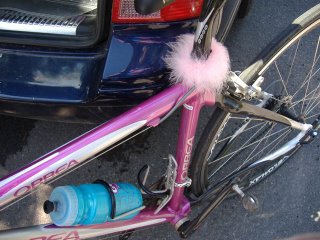 The most memorable thing about being a Bella this weekend, is the enormous number of compliments we got on our jerseys AND on the fluff that Amy provided us for our bike flair. We were called Team Fluffy and there were a lot of questions about the potential for drag because of the fluff. (Maybe that can be my excuse #3?) Hopefully there will be a couple more Bellas/Belli by the next time I report!