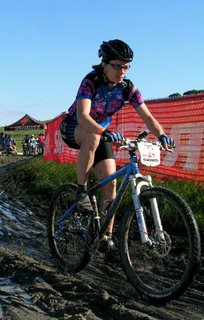 I am doing this race report a little different. I am going to start with a race report for a little girl named Grasha that I met this weekend….

An hour after my race had finished was the kids race. I was watching the start and there was this little girl that looked like she needed some help. So I hand Noah to my husband and run over to help her.

The course is 1/2 mile and this cute little girl on a bike with training wheels was all but 3 or 4 years old. The first little part is down a hill and she starts off and says to me” I can do it.” So I run next to her and she is doing awsome she makes it down the little hill and we start into the next part. I am having to push her through the mud and she just keeps on saying outloud to herself” I can do it, I can do it, I can do it”

I keep cheering her on telling she is awsome and that she can do it. We go across a small small stream and I finally ask her what her name is. She says ” Grasha, Super Grasha” . She was so pumped and just started back in on ” I can do it, I can do it” I am not sure how big her vocabulary is but she had all the right words for racing.

The course actually has a little tiny bridge crossing I help her get set up to cross, but she is a little scared. I told her I thought Super Grasha could do it. And there we went across the little bridge. ” I did it” It was uphill to the finish so I had to help lots, I was getting quite the after race workout in. She was the cutest thing ever. We cross the finish line and she says again ” I did it.”

I gave her a high five and told that Super Grasha was awsome. A little later her mom brought her over and Grasha thanked me and told me she was going to be a Super Mountain Biker like me. It is amazing how awsome that can feel, especially coming from a little 4 year old.

Ok here is my report….
I woke up Saturday morning to a downpoor of rain. I couldn’t make it from my door to my car without being drenched. It was a little hard to make the decision to head to Winthrop, which is a 4 hour drive into the Cascade mountains where it was also raining. So when the rain let up we loaded up with Kris, Noah, Grandma, and myself and headed due west.

We arrive in Winthrop at about 5pm and it is pouring rain. It had been raining most of the week so it was fairly muddy there. We make the decision to skip pre riding the course so that our bikes will work the next day and go for a little spin on the road.

We wake up Sunday morning (5am thanks to Noah) to a low layer of clouds and the sun peaking out once and awhile. The race started at 10, I had a great start we did a lower loop and then would head up to the top of the mountain for 2 loops. The lower loop was awesome I only put about 30 seconds to a minute on the next rider. It is a fairly flat loop so pretty hard for me to make ground, we then head to the climb.

I had a great climb I probably put 4 minutes on the next girl. As I am climbing I see lightning ahead and hear crashing all around me. Then this crazy rain came down on me, it was coming from all directions. I am thinking to myself… how safe is it to be on the top of a mountain on a metal bike in a lighting storm.

Needless to say I was excited to be starting down the hill. It was so muddy heading down and I was soaked from head to toe. About half way down I am frozen, my whole body is shaking. I know I am loosing time on my lead but there wasn’t much I could do. My hands, arms, legs, feet, and chin were all quivering I could hardly hang on to my bike.

Out of no where I here a little voice say ” Excuse me Shannon” Nicola (a superstar at muddy decents) passed me. We came around the finish and I was having trouble thinking about going around for another lap. A lady actually ran next to me and asked if I was alright, of course I say yes.

I headed out and caught Nicola fairly fast, luckily with the climbing I was warming back up. I think I put about 2 or 3 more minutes on her in the climb hoping it was enough to finish the decent. On the way down I got behind a Sport male that would not let me by. I think he was having difficulty letting a woman pass him. He finally crashed and took up the whole trail. NOT COOL!!! I was being chased down.

So to make a long story short I was caught again, I sprinted the last 1/4 mile to the finish making myself dizzy trying to catch her but came in 2nd by 15 seconds.

I think I actually threw a temper tantrom by the car. I was so upset with myself ( don’t worry I was by myself). So it probably looked more like I was having a seizure from any viewers. It was the first time in a long time I have been out downhilled. So I climbed like a demon and downhilled like a baby. I realized I need to get off the trainer and do some downhilling with my husband and his friends. Anyone up for some babysitting???

A Big thanks to Mark Peterson and Joe Brown for putting on such an awsome race and fun course.