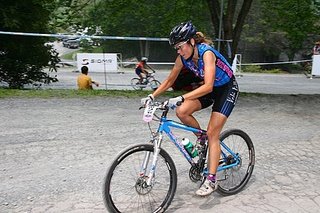 Alright, so its been a little while since I raced this, but I have been super busy with racing so I haven’t had a chance to write. I was really looking forward to the Banner Elk race in NC since I had heard the riding there was awesome.

After preriding the course, I was pretty excited about the race. There was a good hard climb to start, and then some singletrack, and then more climbing. The decent was a bit tricky since parts of it were slick from rain and there were lots of roots and rocks. I decided to keep with my schwalbe tire selection of Racing Ralphs, which ended up for me being perfect. Luckily the day of the race there were clear skies and some wind which dried things out a bit.

I had an ok start, but not great. I held by position for the first part of the climb, but then started passing girls on the second part. I got into a great rhythm and felt really good the entire first lap. I had settled into ~27th, and began the 2nd lap great. I did have to run a few parts of the downhill since parts of it were quicker (and safer) to run. This came back to haunt me on the start of the 3rd lap.

Starting the climb on the last lap, I began to cramp so bad that I couldn’t pedal. I had to coast for a bit and softpedal to get my hamstrings and calves to release. I climbed the first part of the climb in a “half cramp” and then it went away. On the last downhill, it came back. I had to stand on the side of the trail for a bit since there was nothing I could do.

I made it down, loosing over 8 minutes. I dropped 10 places. Oh well. Its all part of racing. I had a great time up until the last lap. The issues were definitely me, not the bike. I had a “mechanical free” race thanks to my SRAM stuff. Oh, and it was my first time running Crank Brothers Egg beaters, but I had absolutely no problems with the switch. I was worried about that for nothing.

Overall I had a great weekend, and raced better than I ever have- thanks to the great support from my teammates and Alex, our awesome mechanic Morgan and his wife for cheering, and especially for Chelly Richards who put the team up in her house the entire time- Thanks! I will get those girls at the next Norba!