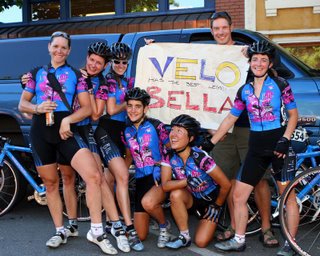 Velo Bella-Kona riders decide to make some moves and shape the race in their direction. The plans today almost worked and Hiroko almost slipped out a top 4, but Jane and Leiselot did some good work to stay with the climbers who chased the break down with only 6k to go. Kele who was in the break had a mechanical with her nuetral supported bike and had to work hard to stay in the race after such a tough break. (Kele’s Kona bike finally made it to town for the next one!)

With excitement like this its ok to be missing the Tour de France.

Great job out to Ryan Hostetter, as this is her first big NRC stage race (as a cat3!)

Day 3:
Cascade Day 3 was a TT in the morning and a crit at night.
Stage 3 Photos

On to the downtown crit.
Velo Bella-Kona gals knew it was all or nothing and Kele had Laura Vangilder of Lipton marked for the win and that guess was c.orrect! Temp was 93 degrees!

After a fast start pace put on by webcor riders, the attacks came, and Kele went hard with Vangilder, Cury of webcor,and Ruiter of Victory. Martina of McGuire managed to jump into the break later too.

The gap was immediate with Kele taking Prime after Prime after prime! Until 2 laps to go when Van Gilder heard the $500 prime being called out and she took off dropping the group of 5 in the break away. Kele saved it up and in the sprint took second place!

The rest of gals made it in the peloton. Ryan our Cat 3 racer suffered from an early gap by another rider that was formed and was pulled part way through the race but looked great! She is really feeling the race now after 4 events.

Day 4:
Well, not sure about the papers, but Kele, Amber Rais of Webcor, and Martina of Mcguire slipped away on Lap 3 of 4 to hold the field off for up to 2 minutes all the way to the finish.

On the last climb with about 5k to go, Kele was gapped but hung on to the end to finish 3rd only seconds off first won by Rais.

Jen C had to drop out on the second lap due to a pain in her leg that we were concerned could be a muscle tear or problem with a tendon.

The rest of the ladies pulled in together with the field sprint, Lieselot thinks this is her best sprint yet!