Here’s a little report of our “fun” weekend of racing in Auburn, NY at the Owasco Stage Race…A couple things to keep in mind: this was supposed to be a 3/4 race, and it was made up of a lot of 3s and several very experienced 4s. Then they combined the 1/2/3s with our race to make it “open women” – so it was a very, very tough field of 33 starters. Sue Atwood, Sue Kahler, Amy Kneale and I did our best to represent the pink and blue. From a language teacher’s perspective I found it neat that there were Quebecois and German speakers in our race, and I had a little fun shooting the breeze in another language with some very pleasant racers. 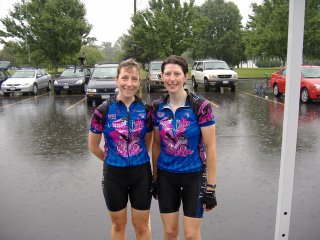 First two shots of some wet rats after the time trial…look at how we’re plastering our smiles on.

We found a third wet rat – this one is much more cheerful and made us
liven up a little. 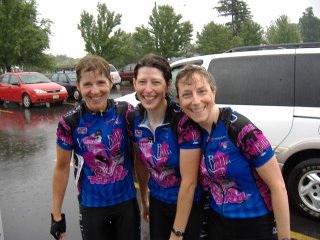 Ok, so the 12 mile Time Trial….Sue A. may have been the only one
with a decent warm up, as she’s good at arriving on time. As you can
see, it rained on us. A lot. Downpour actually. At points it was
hard to see. The course is very hilly and nothing like our local
club tt which is flat. Amy had a great TT and was loads of time
ahead of the rest of us – how does she do that? She’s supposed to be
a hill climber??? I guess part of it was that it was a #[email protected]$%! hilly
course. Sue K and I ended up right next to each other in our times.
Sue A (we’re working on nick-names…) was not too far back.

Here’s a nice shot of Sue A looking thrilled to have the photographer
poking a camera in her face before the circuit race. 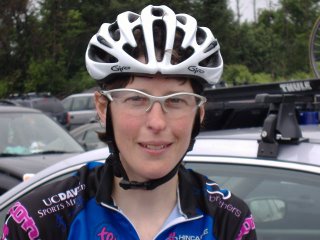 The Circuit race: kinda fun, though much hillier than most of us
would have liked. It was supposed to have been a crit, but the race
organizers hadn’t taken into account that the roads in town were
under construction…so this course was put in its place. I think we
did 4 laps on a 3.25 mile course, with each lap being counted for
sprinting time bonuses. The pace was very fast, which took a couple
Bellas by surprise. Amy and I did manage to stay in the pack and all
of us did stay up on the first corner where several women crashed on
the 90 degree turn on wet, slick tar. Amy I and both noted that we
fishtailed on the stuff. That corner afterward became almost
ridiculously slow. (which was fine by me) In the end, it was a pack
finish with my redeeming myself for the TT (and the road race to
come). Amy was in the next group, then Slick, then Sue A.

Here we are goofing around after the race, practicing sprinting. 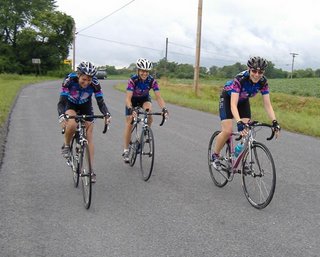 SLK or Sue K or now known to us as Slick. Can you believe she’s 53?!
Nice to have such genes. She trains really hard though too.
. 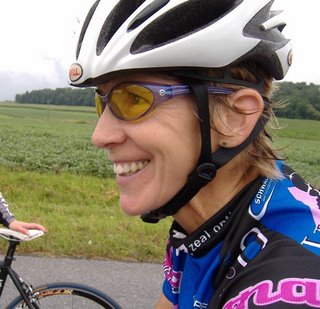 Silky…Slinky…Amos? We’re working on those nick-names. 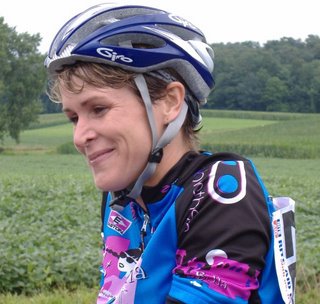 What some of us might decide to do instead of bike racing if we keep
getting dropped. Wonder if my electric mower will have enough power? 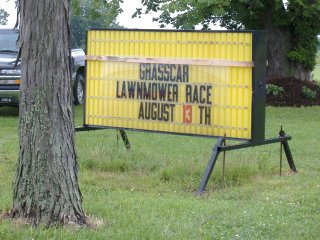 At the Road Race:
No, contrary to what some say, they’re not sexual innuendos!! It’s
supposed to be cute! Looks like an ostrich’s neck!!! (BTW, my bike
is featured in Bicycling magazine – even the color!) 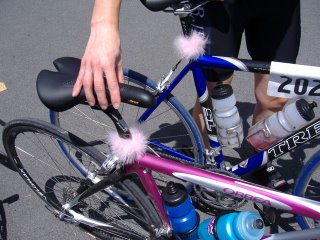 Ok, the Road Nightmare, I mean, “Race”. Just 45 miles, but with 5
KOM climbs, with extra non-bonus hills for good measure. This race
was a major leg buster. First KOM was at 5 miles!

We all had different goals – many of us accomplished them, despite
the race being extremely challenging. One challenge was that the pace
car didn’t know the route and took a left at one important corner,
when we were supposed to go right. Since I had preridden the course
a week before, and I could see the arrow on the road (duh), I yelled
to the pack to TURN RIGHT, NOT LEFT! and found myself for a brief
while at the very front on the 2nd KOM as a result of the leaders’
following the pace car. That moment was, naturally, very short lived.

Sue A said she was going to stay with the pack to the first climb,
and she did that – but then had a solo, hard-working ride. She did
get lots of encouragement from the onlookers, complements on her
fluff (not sexual comments!) and jersey, lots of “oh, la, la”s and
“go Bella!”s which surely must have helped her mental state.

Sue K finished just behind the chase pack – she had clawed her way
back onto a group of 4 I had clawed onto after the second KOM, and
continued to ride strong (dropping me) and steady on the never ending
climbs the rest of the way with a Mission in Motion rider (less than
half her age!).

I was dropped three times, managed to pull myself back onto the chase
group twice, but my legs just couldn’t take the hills any longer and
watched SLK and Chelsea (MIM) ride away from me. Rode then 21 miles
alone, thinking ok, at least no one is between me and Sue K, I’ll
still finish just behind them, when less than 1K to go, three women
working together caught and passed me at the finish. Such a bummer.

And then there’s that damned Amy. She never got dropped from the
chase pack, rode all the hills strong, and finished with a known
impressive local hill climber (a vocal complainer and yammerer, but a
strong racer) and a group of about 6, not far back from the leaders.
I did want it recorded that I beat Amy on two of the five KOMs – that
was an accomplishment for me, even IF she wasn’t trying…Amy did the
rest of us Bellas proud. This will be a good race for her confidence
for the NY Empire State Games coming up at the end of this week. (If
she didn’t blow up her legs yesterday, but knowing Amy, what would
ruin most, just makes her stronger.)

Today I want to find a masseur…