The course was relentless, either up or down. After 500m from the “way too steep starting ramp” there was a fast little descent quickly followed by the first of many climbs. Michael reminded me to try to think about the TT actually starting at that climb. During my warm up it was raining, thundering I think there was lightening but that might have been the flashes of “what the hell am I doing here?” going through my head. All I know is I entered the starting block totally wet, but focused, and ready to rock. 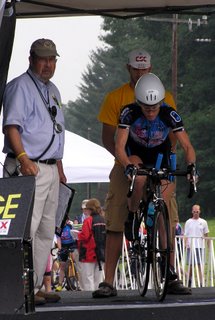 My exit down the ramp was not pretty, I wobbled & laughed but found my way into a groove. My 30 second gal was a strong time trialer from So Cal so when I passed her within the first few kms I knew I had something going. Soon I found myself passing two more and then saw teammate Liz. Its hard to pass a teammate and not say anything but at this point in time talking was an energy sucker that I couldn’t afford.

I managed to make my way to the turn around only to swear out loud as I nearly went down ( I really think I should practice this TT thing) I avoided the pavement and got rolling again. After suffering up “the wall” I convinced myself I was going to survive this thing and wiped the drool off my face. I headed back into the park, down this wickedly fast descent which scared the crap out of me in my aerobars (once again did someone say train for a TT? hmmm..) I found myself thinking “this is the last climb” over each of the last three climbs (sure sign you need to be done) yet when I saw that little house at the crest of the final hill I knew I made it.

As I rolled back to the staging area I saw Michael walking back from the clock. I gave him the “well, whass up?” look and he showed me two fingers. Well, not a bad start but how far out was I? A long ways, I got my ass kicked. Ruth Clemence of Simple Green clearly out powered the field that day.

After a day’s rest and witnessing a kick ass crit raced by Michael the day before I was ready. The rainy weather had moved on giving us some heat and humidity. I made two stops prior to hitting the staging area, one was the women’s room which I couldn’t believe how sweaty I was when I saw my reflection in the mirror, the other was the concession stand where I bought an ice cold bottle of Aquafina water. Good move!

Only 11 of us on the line but what a fun crit we had! It was fast from the whistle. I made an initial, early attempt at a little break, mainly just to see who was willing to work but about a third of the way thru Tracy Huber jumped and everyone just let her go. I wanted someone else to chase it down, so I held back. I made a few attempts to bridge but found the whole group was going with, sat up & waited. I didn’t trust my sprint enough to have all of us together .

We did bring her back and then with about 12 laps to go Huber jumped again, no one responded. She dangled out there in front of us, 10-15 seconds or so for awhile. I once again tried to be patient to see who would chase, made a few mild attempts but didn’t want to blow my match. With 1.5 laps to go, Moria Gandy of Velo Sport (S. Cal) got a huge jump, I was on it. We were cruising and by the final turn Huber had only 3 seconds on us. I hesitated, letting Gandy lead me out a little further then jumped. Huber got me by like half a bike length on the line. Shoot! Should I have gone sooner? Should I have chased her down? All the variations ran through my head.

I found myself stuck in a parade as I drove back to Seven Springs. Somerset, the closest “town” was having SummerFest and it seems the parade was Friday night right on my route. After suffering through an annoying 30 min. of detours I exited the town behind the fire truck, post parade escort. I kept thinking, maybe I should hang my medals off the rental and plant my bike on top…sure this could be good for a PA. pot roast. Nah….I called Sabine & Michael to whine and drove home.

Today was my day. I really wanted this win. The course was a short 6 mi. loop that we did 6 laps of. It seems you either going up or down, not much room for recovery. This also was by far the hottest and most humid day. Liz & I had a good time warming up together. We tried to chase down someone to feed us but left the starting line with little confidence we had it covered.

The first two laps were pretty mellow. On lap three I dropped my chain going up one of the rollers. Dang! I couldn’t get it back on. I jumped off and put it back in place. By this time the Shimano support vehicle came up on me, the guy held my bike and shoved me off. I was trying to keep my heart rate in check and not panic as I chased to get back on. Liz being the true teammate that she is had gone to the front of the group to control the pace until I was back.

The pace changed on lap 4, Tracy Huber once again was the animator. She jumped, Clemence followed and I was on her wheel. I knew they were the two to watch but it was so cool when I heard Liz holler “get on that, that’s the move.” We took off with one other girl in tow.

We traded pulls for a bit but we had a hard time getting everyone to play. I tried to be patient and take in how everyone looked, how hard they were breathing etc. By the time we came around the start/finish line to start lap 5 I had a pretty good idea it was gonna come down to Tracy Huber and me. Not much really happened during lap 5, just sort of an assessment lap. When we took off up the first climb on lap 6 the pace picked up a notch, we dropped Clemence. Huber looked over at me and said “we gapped her off, we gotta go.” We took the lead and kept the pace high down this working decent without much help from the Priority Health girl. Huber hollered at her that she needed to help, she couldn’t just ride the train. It was great, I loved the way she worked her. Priority Health did get involved but it was clear she was just hanging on to us. I was still gapping them off on the descents so on the last lap on the second of the long descents (about 4 km from the finish) I decided to keep the pace up. I didn’t drill it but I was going to make them work to catch me. After this decent there was a 3-4 min climb. I stayed seated but pedaled hard and kept a little distance. I was afraid to really go for it as there were still a couple of climbs to the finish. When we hit the long & I think toughest, especially at this stage of the race, hill with 1km to go we were all together. Huber was sitting on my wheel. Damn, not what I wanted to happen. I tried to ditch her, I swerved left and right, slowed down but there she sat. I did not want to lead her out. As we hit the feedzone hill with about 500m to go, I took the pace up a little bit, then she jumped me…right as we crested the hill. I only had 150m to try and catch her and I couldn’t, she got me I was so bummed. I really wanted this win. I felt great, I knew I could do it but, it didn’t work out. Should I have really attacked when I had the gap at 4km to go? Should I have waited for them to get her in front of me? Who knows….. In the end it was a fun, tactical race and I gave it my best shot!

‘Til next time Monica

One Response to “Road Natz Report from our Silver Bella Goddess”