After my disastrous attempt at Masters Nationals in Colorado Springs, 2002, I swore that I would never compete at altitude again. My asthma and the altitude pretty much made me the ‘One Lap Wonder’ – I could go one lap around the track really fast before having an asthma attack and cough up a lung. Somehow Robyn convinced me to commit to Natz again this year in Colorado Springs. She must have caught me when I was drunk or something.

Determined to do well this year in spite of the altitude, I met Robyn in Colorado Springs a week and a half before competition started so that we could acclimate. We scored host housing at our coach’s (Missy Thompson – former track star studette) mother’s house just a few blocks from downtown Colorado Springs. Karen, our hostess, was wonderful to us. Her house also had a couple of puppy dogs to play with 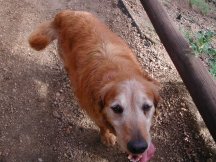 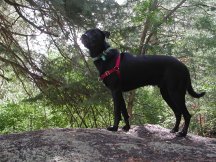 and a resident deer that hung out under the front porch. 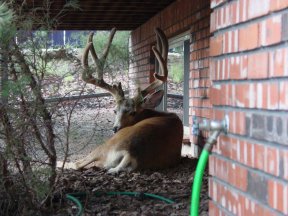 Our first week consisted of track workouts that we felt like we were going to die on, alternating with easy 1.5 hour rides, playing with the dogs and drinking boat loads of Pete’s coffee. Finally by Saturday we were feeling human again and had a great workout at the track. That was a good way to end the hard efforts before competition began on Wednesday.

Wednesday was the 200 meter sprints for seeding the sprint competition and the 500m time trial. There were four Bellas competing at natz: me (45-49 age group), Robyn Jensen (50-54), Barb Harick from Minnesota (45-49) and Kele Murdin (30-34). Only Robyn and I attempted the sprint competition. The promoter lumped all 40+ women (19 of us) into one group for sprints making that field one of the deepest at the meet. The top 8 went on to compete in the sprints, but neither of us made it. I set a personal best of 13.67 seconds for the 200 meters, only .2 seconds away from 8th place, so I was pretty happy even though I didn’t make the cut. Later that afternoon was the 500 m TT. The 500 m TT is a weird trackie event – it is a standing start followed by going balls to the wall until you puke for the rest of the 500m. Half of the event is knowing how to do a standing start and how to hold the black line (the fastest line on the track). The rest is just pure speed. The Bellas kicked butt with Kele placing 5th in her age group with a time of 40.1 seconds, Robyn placing 4th in her group with 43.231 seconds, Barb was 4th in our group with 42.194 seconds and I got 3rd with 41.614 seconds. I was way happy with that time. It wasn’t a personal best, but it was the fastest I had managed to go since 1997. Woo hoo! I finally wasn’t fat and super slow anymore! 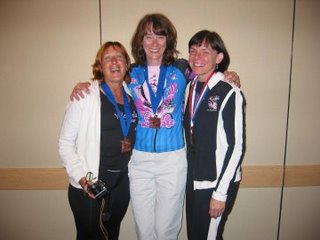 Robyn, Barb and I had the day off since we didn’t make it into the sprints. But Kele won a National Championship in the 2k pursuit with a smokin’ fast time of 2:33! Go Kele!

Today Robyn competed in the 2k pursuit and Barb and I had our points race. I thought I wasn’t worried about this event but the closer it got, the more keyed up I became. It was the hottest, driest day we had had so far and I got to the track early to cheer Robyn on in her pursuit effort (Robyn took 3rd with a very respectable time of 3:06). 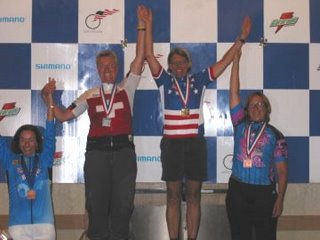 By the time we finally got to the points race, I was hot, over warmed up and tired. My plan was to play it conservatively on the first few sprints, be near the front to go with any major attacks and really be aggressive on the last sprints. The 45-49 and 40-44 age groups were combined for the race so there some fast women, such as Annette Hansen, to watch for in the younger group. The groups would be scored separately at the end. On the lap before the first sprint I moved near the front and was right behind Annette for the sprint. Alright! Plan was being implemented perfectly! Until we got to the home straight anyway – then it became clear that I was under geared and not in top form as the leaders effortlessly pulled away from me. Everyone sat up after the sprint and I clawed my way back to the group. Wheezing and horking up part of a lung, I decided it was time to implement a new plan. This one was called ‘hang on for dear life and hope for good sprint at the end’. Fortunately for me the race was really lame. With the exception of Barb who did a brief attack on the front, everyone watched Annette and sprinted when she sprinted and sat up when she sat up. If anyone had decided to make a real race of it, I would have been dropped like a bad habit. With 9 laps to go, Tracy Huber from Kentucky took a flyer off the front. She was in my age group, so none of the leaders were interested in chasing. All I could think of was ‘You go girl. If you have that much energy left, you so deserve that gold medal’. All I had to do was hang on and beat everyone else in my age group in the final sprint. 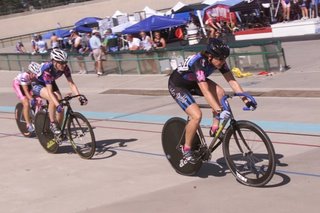 I finished 7th in the last sprint, giving me 7th overall in the race and 2nd in my age group. Barb finished right behind me 8th overall and 3rd in our age group. I was just grateful it was over. 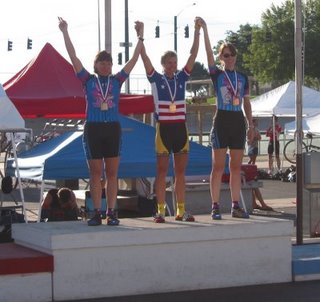 Robyn and I had the day off, but Barb competed in the 2k pursuit. The pursuit is my idea of hell, so I passed. Barb was 6th with a really good time of 2:54.

Robyn and I decided to do the team sprint just for grins. We knew we didn’t have a rats chance of winning, but we both love the event. We had a good ride – Robyn did the first lap and had a good start. I was right on her wheel and was able to accelerate in her slip stream as she pulled off. I felt good on my lap and kept my speed throughout. We ended up 6th out of 7 teams. All of .014 seconds out of medaling in 5th place and .214 seconds out of 4th place. Yikes! If we had aero helmets we definitely would have gotten 5th.

Kele and 3 other women won the 3k team time trial and set a national record for the 30+ age group in the process. I believe this is Kele’s first year on the track. Two national championships is not a bad start!

I think Velo Bella ended up 5th in the team competition. Not too shabby for only having four women. Some of the teams had more than 10 members competing.

But the best celebration was getting home and having my insane friends present me with a ‘I’m a winner!’ crown, a Velo Bella Silver medal and a giant bottle of vodka. 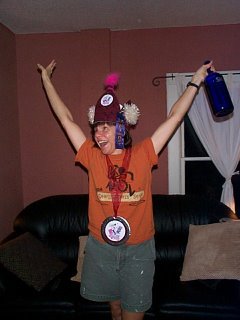