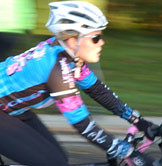 News girl note: You know those friends who always call when you are getting busy… it seems that me and blogger are the same way. Sorry about the lateness of this post.

This season has been a strange one for me – not really getting to
ride too much due to the personal life and injuries…but none the
less, I decided to sign up for the 2 duathlons I did last year, once
again.

This past weekend, I raced in the Iron Girl Duathlon in Bloomington,
MN. Last year, the bike portion was terrible! There was a stretch
where we couldn’t pass and I got stuck behind some grandma out for
her Sunday ride….literally…the woman wasn’t even in the race! This
year, they changed the course due to so many complaints from the
athletes last year (which numbered 250). I had done a lot more
training last year for the race, and ended up 3rd in my age group,
and 26th of 250. This year, I had high expectations of myself to
finish in the top 15…maybe even top 10!

Boy, was I wrong at the level of athletes that would be there this
year! I knew that the pool had grown to 600 women competing, but I
didn’t realize that there would be some people there who had just
finished the Ironman in Wisconsin, qualifying for Kona with a time of
less than 10 hours!!! I believe 3 of the top 5 all did that!

Needless to say, I decided that I couldn’t compare myself to them…I
had not been training like they had this summer, so they could blow
me away. What I decided I’d do is compare myself to me from last
year. The distances this year were longer for running and for
riding, and the course was MUCH better!

I had a birthday the week before and decided to spend the time, until
Saturday in New York City. The plane ride home was nice (first
class!), and I did catch some good zzz’s. However, there is
something to be said for traveling right before a race – I think I’d
like to not fly the night before. Oh well…I made the choice to have
fun on my birthday, now it was time to pay for that!

Running around Normandale Lake, the scenery was beautiful as the
colors are hitting their peaks. Starting out, I remembered how I
need to pace myself and not let the first run take my energy. I ran
comfortably, then got to transition (which was not designed well —
you had to run around the area before getting into it — doing that
with cycling shoes was not fun!). I realize that transitions are not
my strength! I hop onto the bike and start my clock. The gals who
had passed me on foot — no challenge for me on the wheels! I
caught up to many and passed many women who were really strong on the
run. Their advantage is that they have another run after the bike –
my advantage is that the bike portion is 5 times as long as the run
portion! Not realizing how hilly Bloomington is, I was amazed at the
change in difficulty of the ride from last year. I kept in mind the
information that I had learned at Balance from Fiona, and Barb
Harrick in my mind saying “Keep the Cadence!” So I did that on those
long climbs. At one point, there was a spectator, obviously familiar
with cycling, who shouts at me on the climb “Great Cadence! You’re
smoking!” Wow – that was really good to hear — I was doing it
right, and someone noticed!!! I continued to play leap frog with
some of the gals who were strong, and on the second ½ of the ride,
managed to drop the leap froggers. My average was MUCH better than
last year on a course that was much more difficult. I heard many of
the other women stating how they thought the course was harder than
they had anticipated as well. Don’t get me wrong – it wasn’t a
course that was extreme or unbearable…just exceded my expectations!

All in all, I ended up 37 of 600 Athletes. I finished the race in
1:44. I guess I can say I’m pretty happy with my time and
placement. What I’m even happier about is the fact that I was out
there again, racing! Representing the Bellas in stylish fashion,
some of the people that were cheering recognized the Bella colors and
even shouted “GO BELLA!”

I love being associated with the Bellas – Oh la la!

Until next weekend’s report from Green Bay – Ciao~
Kristy

This fabulous post was written by one of our awesome bella volunteers ~ Sabine is the cofounder of Velo Bella and if you like this report, you can thank her with brownies and beer.