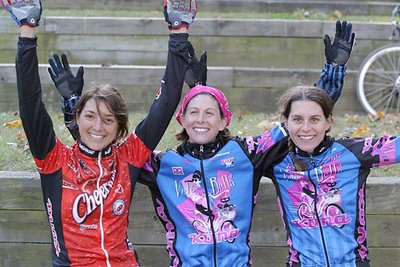 I finally had my new Kona ready to ride, Easton tubular wheels included. After a week of gluing and drying we only hoped that they would hold, not rolling off the rim.

We are lined up at the start, waiting, waiting, all the while the nerves are “kicking.” The gun goes off, SRAM shifter in my right hand pulled tight to the handlebar and rapidly moving up through the gears, one at a time, feeling very comfortable in my sprint position. I hit the woods first with Mel right on my wheel and Anna close behind. The course was fast with the turns sandy and a little slick but the tires held steady.

We were much protected from the 40 mph gusts of wind that were predicted b/c we were in the woods, thankfully! Around the turns, over the barriers, down the hill, up over the asphalt and to the volleyball pit. Crossing this area was a toss up; many people rode through but I decided to get as far as I could, carry momentum, and then dismount and run through the rest of the sand.

It was sometime around this area that I hear the announcer say that Mel had caught Mandy and was holding a gap, and that Anna was within striking distance of Mandy. I was psyched! The bellas were riding awesome! I rode much of the course in my big ring easily transitioning from one to the other. The bike felt fantastic from top to bottom. I think with a little more dancing we’ll form a great partnership.

Great job out there ladies and thanks to all those who were out supporting and cheering, it certainly makes racing more thrilling!

One Response to “Hopping along…”