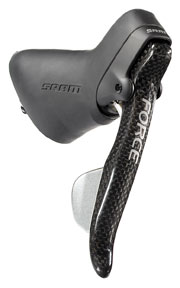 Stephanie, Callie, and I headed up to Maine for the season opener of the New England Verge Series. Racing on the off-cambers and swamps of the Pinelands cross-country ski venue has become an annual welcome-to-cross ritual, so imagine our surprise when we found a fast roadie course and brilliant blue sky! The race was off from the gun. Evidently my legs are having some issues with getting going fast. Lyne Bessette was off, followed by Katerina Hanusova of Luna Chicks, Mo Bruno, Melissa Thomas, Mackenzie Dickey, and Christine Vardaros. Maybe I was too involved with admiring my new SRAM shifters to notice that the race had gone up the road.

Stephanie and I worked together for a few laps, at which point we caught Mackenzie and Stephanie split off. One among many problems with charging from the back is that when you catch someone like Mackenzie she will have no interest in chasing down the rest of the field (since she has just been dropped by it), just in beating you, so you have to be careful. So I couldn’t quite go flat out since now I needed to worry about making myself vulnerable to Mackenzie’s sprint. After about two laps of riding together, I took a better line through a mud pit and put on the gas to drop her. I ended up 6th, a decent ride but I need to challenge myself to be at the front when the race happens. Stephanie completed a great ride for 9th place. Callie finished her first race in the UCI women’s A field.

Sunday’s course was even faster – a road climb and long fast mountain bikey descent that I gave a fair amount of practice during warm-up. The start was again fast (Lyne was warmed up from having raced the men’s B race). I was feeling sluggish, once again finding my legs a bit too late, but on the second time down the hill was charging when I flatted the rear wheel. Those Easton tubulars can’t come fast enough! I’d made the mistake of putting a spare bike in the wrong pit, so I was in bad shape. Rode the flat for a long time as person after person flew by until I was decisively in last. Nothing like a little incentive. I tried to offer as much draft as possible to my friends and teammates as I came by. Once I got going I was riding hard, finally starting to feel smooth on the bike for the first time this season, but the race was long gone and I felt the painful feeling of a missed opportunity. Lyne won, followed by Katerina, then Mackenzie, who had stuck with Mo and out-sprinted her at the line. Stephanie rode a strong race to finish 10th. Callie had a great ride to finish mid-field. Richard Sachs rider Amy Wallace, who had an on-fire start to the season followed by a string of crashes and injuries, was back in action. For two races now she’s been there on the sidelines cheering us on. That’s class!

So there it was: gradual progress plus setback on my end, Stephanie and Callie riding strongly and getting faster by the day. Granogue is next weekend and I’m ready for a good ride. Velo-Bella Kona will be out in full force, rounding the water tower on the Dupont estate, so watch out!