Here’s the word. If you trust Loca to get the details right…..

Saturday was a very fun and demanding course, hilly, steep run ups, off camber turns, and a little squishy mud like stuff – definitely a grade 2 on the index.

Katie Compton took off from the very first turn and stomped on everyone. Poor Lyne and Georgia never had a chance to fight for the win. I had a decent start, but about 5 minutes into the race, my body tried to shut me down. All systems revolted against the effort and it took a lot of focus to keep pushing. It was my first time travelling to the east coast just the day before a race, and the delayed flight, late dinner, etc all caught up to me.

I kept my head in the race, riding around with Melissa Thomas and then Tara Ross until they both faded. I felt better by the final lap and finished in 6th. Dee Dee had a great ride, outsprinting a very elbowy Mo Bruno for 4th. With junior phenom Stephanie and Anna both having good rides, we put four Bellas in the top 20, though Melanie had some mechanicals and did not finish. 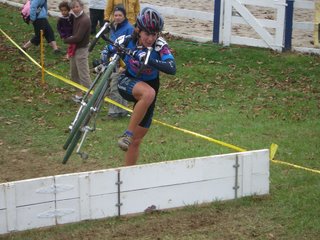 Sunday was a much different course, mostly flat and grass, with some more fun off camber stuff and a long sandy stretch. The ground was soft and again a 2 on the mud scale. I was really happy that I had my new Easton aluminum tubular wheels, and I brought my tires down below 30 psi and ripped around all the crazy ins and outs and tough turns.

In the first few laps Georgia, Lyne, and Katie gotaway, while I trailed just behind in a group of Mo Bruno and Mackenzie Dickie. I probably spent too much time playing cat behind them, and in retrospect I ought to have tried to stick with Georgia after she got popped off the steam engine up front.

I did eventually ride away from those east coasters, and soloed the second half of the very windy course for 4th place. Dee Dee got stuck behind an early crash, but worked her way up to 6th. Melanie had a better day today, and I think again we all managed top 20.

It was great having so much support – I would not have even considered making a last minute cross country trip without the help of everyone. Sheryl picked me up at the airport, with special goodie bags of flair and snack food for each Bella! I wore the cool pink hair ties all weekend, and I’m going to chow on my cheez-its on the plane tomorrow. Dave had plenty of space for Anna and I to sleep, and we really apprieciated the comforts of home – especially drip coffee.Mmmm… coffee.

Our top notch support crew of Morgan and Hillary Styler came out both days. I don’t know what I would have done without their help – seeing how I had to go to bed at 11:30 on Friday night after fighting with my tangled chain and derailleur for 40 minutes. I just couldn’t get the chain out of the loops and x’s after the flight, but of course Morgan got it sorted out on Saturday before I even got my flair on.

It was a weekend well spent, I picked up 15 UCI points, a rare commodity for us California racers. And I had a great time dressing the east coast crew in flair. I had to teach them a little about posing for team photos though – they can be sooo proper sometimes. Can’t wait to see the photos!