Biscuit Brings It at Pilarcitos 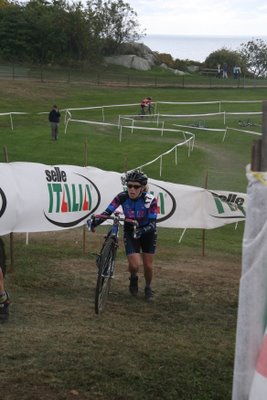 Sunday’s final race in the Pilarcitos series was perfect racing conditions. Cool weather, sunny skies, light wind, and a whole lot of screaming spectators. I had only been to one other Pilarcitos race this year since the other three conflicted with USGP weekends, so at the callup, I had no standing. I was the unnamed “rest of the women’s field.” I felt a little lonely, being the sole person in the second row. Fortunately, once the whistle was blown, we were are the same – fighting for the front. The field included Rachel Lloyd, this year’s new face Shelly Olds, fast Stella Carey, crit standout Kristin Drumm, Lauren Costantini in her last Norcal event, Josie Beggs beautiful as ever even with plates in her cheekbone, our own Andi Mackie, Katrina Baumsteiger, and other local familiar faces. Missing were Sarah, who was there to cheer, and Anne Fitzy.

I had no idea what to expect from my body since yesterday’s race was the last day of a two week training block that included two-a-day workouts and a million hard efforts. My warmup sucked – I felt like I was riding through a creek upstream. But there is something about the race atmosphere that cut through the muck. I had a crappy start (seems to be a theme this year) and had to play catchup right away. I got stuck on a slow wheel though the twists and turns of the eucalyptus forest but eventually got around before the long beach run. After some more chasing, I hopped on a train of Lauren, Kristin, and Josie. Things were good until Lauren tried to pass me in a tight space and caught her front wheel in my rear skewer. Tangled up, we had to stop and regroup. By the time I got going again, I was behind and had to chase the three down again. Fortunately, my engine got going at that point and I rode past all three through the forest and got a gap that I held for the rest of the race. I was closing in on Stella during the last lap when a mechanical just past the pit kept me from shifting into the big ring. With a lot of pavement left, I did my best in my little ring but couldn’t make up any more time. I finished in fourth, which I was very happy with. Now I just have to rest up and let all the training soak in before nationals. And I have to visualize riding fast through ice and snow – any chance we could truck in some snow for the Surf City finals on Saturday?

By the way, my rock lobster frameset from last year is still for sale if anyone is looking for a holiday gift for yourself or someone you love.