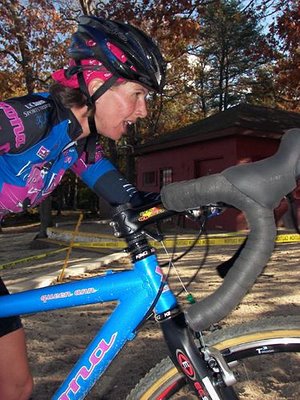 It was the first race I had done that was less than 2 hours from home. How awesome, we loaded Cadence in the car and left the morning of; meaning we were going to get home before 10:00 that night, woohoo! It was one short year ago that I had begun to race my bike again. I was still about 10 pounds over my “competition weight” and still breastfeeding but I was there, infant in arms, ready to race. Last year, 7th, today, 1st but not without a good fight.

I got the hole shot but didn’t keep the lead for long, Mo came around me at some point and I around her and vice versa. Back and forth we traded, making for a very interesting race. Mel had a great start and was with us for a while but had an issue with a flat at some point. The weather was cool and the course pretty dry but there was a nice technical section on the back side. I was able to grab her wheel at one point and decided to attack once we hit the pavement. It took several tries of out of the saddle power tapping but eventually I was able to get a gap and keep it with about 1.5 laps to go. It was a tough race with lots of battling but it was nice to come away with the victory after not having raced last weekend due to illness.

Only 2 more weeks to Nationals!!!