The Dirty Girls of Tennessee The mountain bike chicks of Velo Bella-KONA Tennessee are several events into the season and gaining major momentum!

The season-opening Chickasaw Trace Classic was March 30. The already muddy course received several inches of rain right before the race, turning the entire course into a mud-covered 9-mile loop about the consistency of peanut butter. The sloppy mess didn’t deter our Bellas from starting the course and bringing home results, with many finishing the race despite spills, cuts, and (for one) stitches.

Next on the TBRA calendar was a weekend of racing in Kentucky. The White Lightning TT and XC races landed on April 19 and 20. Keeping in consistency with what seems to be a theme of this years’ races, it flooded rain the night before Saturday’s time trial. The Bellas used their mud expertise gained at Chickasaw to steer their way to wins! (pic of Angela on the TT course in the Vanderkitten jersey, Photo courtesy Dustin Greer)

We’re looking for sponsors for our co-sponsored race with the Jackson Spokes on June 8 at Mousetail Landing in Linden, TN. If you’d like to be a sponsor, contact Angela at [email protected] More details coming soon to mousetailchallenge.com!

Some claim the charms and the namesake of the Ironman Bike Ride the last Sunday in April in Minnesota, is due to the fact that it’s in Minnesota. 2007’s Ironman was a glorious spring day. 2008… let’s just say I’m stoked I finished before the big fat snowflakes. ugh.

Anyhoo, Brooke, Kate, Danielle, Becca, Rebecca, Barb, and me did the 62 mile ride, with hella bad headwind the whole time. It made grandpa’s walk to school (uphill both ways), look like a walk to school in the sunshine, with rainbows in the sky.

In retrospect, at least it was snow in the air… and NOT rain. Because if it snows when you are on bike, you stay more dry than if it rains.

By: sabine ~ Filed Under Twin Cities ~ · Leave a Comment Never Too Much Otter! 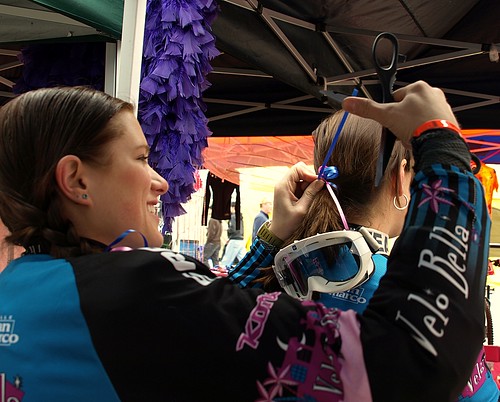 So I’ve spent the last few weeks alternating between excitement for the Sea Otter downhill and apprehension…as many of you know, I had a rough season last year. Beating myself up about earlier poor finishes, then took out my shoulder in a crash at Angel Fire. Later in the summer, I eased back onto the bike, but was scared, wimpy, riding my brakes, too tentative.

Now, after a lot of PT and a winter of recovery, would I still be scared?

First day on the practice course, I took a slow run to get a feel for it. Second run, let it ride a little faster, and it felt awesome. Third run, let it go all out…..and almost rattled myself off a section of brake bumps since I was on my medium bike. OOPS!

For the 4th run, I borrowed Connie’s bigger downhill bike, and let it rip! It was so beautiful! Flowly and smooth, I felt in the zone and in the groove, relaxed and absorbing the course. Yay! I could have ridden all day, but by then practice was over. My face got a workout from smiling too.

No practice on Saturday, which was a good thing, since Connie and I had decided to race in the beginner/sport singlespeed XC race Friday, and I don’t know about her but my legs were HATING me! We hung out at the tent, visited with the other Bellas, made new friends, walked around Sea Otter, and had a grand time. THANKS to everyone for the friendliness and hospitality, especially Sabine!

Sunday morning, practice. My (Connie’s) bike was all decked out in glittery pipe cleaners and rhinestones and ribbons, and we were just loving the course. In fact, I had to force myself to stop practicing to keep from being too tired for the uphill pedally sections. Yes, uphill on a downhill course, but I couldn’t complain since it’s one of the most fun courses I’ve been on otherwise! 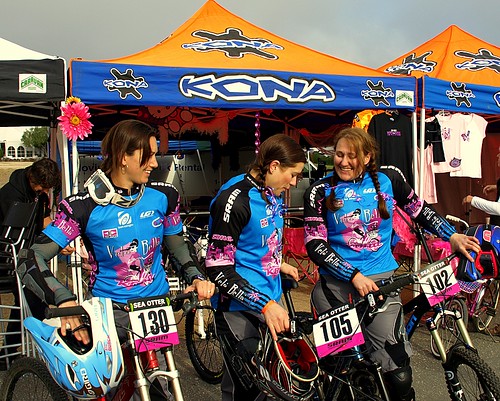 Finally, time for the race. I’m sitting in the gate, feeling stunned that it’s already Sea Otter, it’s already the bike season, it’s already time to race, it’s going to be all over in 3 minutes, then…

Beep, beep, beep, BEEP! I pedal into the first corner, and Success #1: no braking through the corner, yay! Into the doubles section, and while I don’t clear them, I have Success #2: smoothly suck up the bumps and get the right crossover into the bermy switchbacks. Success #3: no braking through the switchbacks! Success #4: no hesitation on the teensy-weensy rock I’ve been hesitating on!

Then I hit Failure #1: the first pedally climb. My legs are SO TIRED! I try to stand in the pedals but just crawl up the hill. 2-3 seconds lost there, so sad! Failure #2: I hesitate at the top of the steep rutted sand section, but once I’m in it I let it go fast. Still lost some time. Failure #3: same as #1, almost no pedalling up the second hill. Sigh, more time lost.

Then, Success #4: no brakes through the bottom of the course, with the exception of into a sharper corner or two, but nowhere near the amount I usually do, so I’m overcoming my fear, yay!

My finish was a 3:02, which put me into 29th place, and which was 9 seconds off the girls I’d like to finish with. Since my only real issue was lack of pedalling, and I did well on the rest of the course, overall I’m pretty stoked! She’s back!

AND, overall the successes outweigh the failures, and the failures are just lessons to learn from. I know, I know, the SS XC probably wasn’t the smartest idea for leg soreness, but it’s Sea Otter and supposed to be a good time, and the XC race was one of the most fun and crazy things I’ve ever done!

And that’s all she wrote! By: admin ~ Filed Under Pro Downhill ~ · Leave a Comment

By Shannon Gibson, Pro Bella
Out Playin’ in the Dirt Somewheres Since becoming a Bella, I rank Sea Otter as one of the most fun race trips all year. NorCal is grand Belladom, and resident within are many leaders of the queensland. I feel privileged to follow in the footsteps of women like Sabine and Laura who wanted their own feminine cycling kit to rock while going fast riding a bike and, oh yes, having fun! Apparently, I’m told, the spousal/significant other men who belong to or have belonged to the queens have their own team- VOS, as well. Well, Brava to Giant’s Kelli Emmett for riding off the front all day. Gutsy move considering the length of the race and the wind. But I did a season of marathons a couple years back, and Kelli always could just motor along really fast for really long!!

Now for my excuses… not yet on form with a post cross late start to base, 3 too many jobs, I couldn’t hang with the surge over the back side. Got stuck behind lotsa traffic and had to be patient until traffic thinned out. Good news is I didn’t run outta gas and I can feel the form coming. Every race weekend gets better. Even the number plates sparkle

And kudos to Leah, who is coming into her own with two wins this weekend. She’s definitely a youngun on the way up to the top!

Hi all, please see my post here:
http://web.mac.com/shannonleegibson/Shannon_Gibson_08/Blog/Entries/2008/4/21_Sea_Otter_‘08.html
Thanks to all for the wonderful camaraderie and support!

By: admin ~ Filed Under Pro Cross Country ~ · Leave a Comment