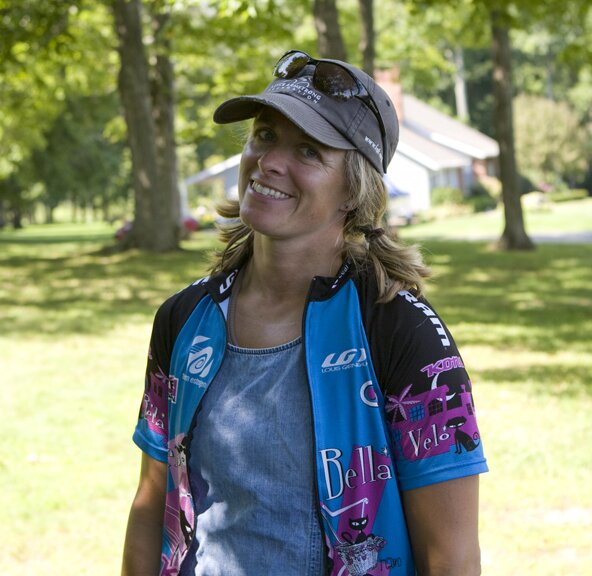 Since being off most the summer with a knee injury I found this road race I could get in before my Colorado trip. It would be my one and only road race of the season. Very exciting, since I was told in March I would not race at all this season. I heard a few other Bellas would be partaking and talked Laura Kozlowski into coming with me. She was on the fence until her boyfriend told her it wasn’t “her kind of race.” She was signed up in a matter of minutes even after registration had closed. On the phone insisting she had to enter this particular race.

This set the tone for Laura. She was going there to win and I was going to help her reach that goal.

I drove and set the pace for the race by cruising at about 85-90 mph and arriving in 1hr 15 minutes, a trip that we were told would take over 2 hours. Being the first ones there, even before the officials had set anything up, we had the prime parking spot under the only tree but in our sleepy condition didn’t notice we parked right next to the porta-johns. Therefore making our car grand central station once the day progressed, with the bathroom line wrapping around the back of our car while we were getting ready. Quite amusing.

Five kittens (Bellas) showed up: Linda T, Lisa, Michelle, Laura, and me. After warming up we all lined up together at the start in our hot little kits and rode like the wind. 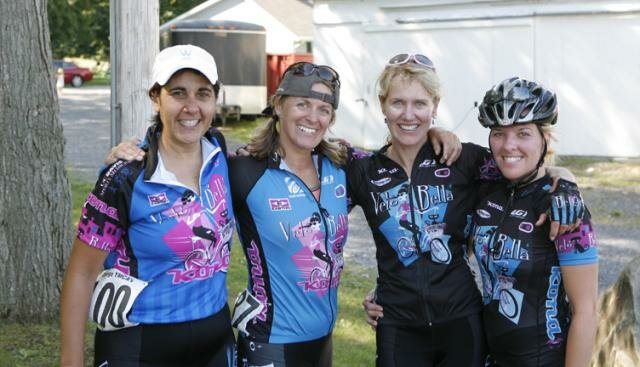 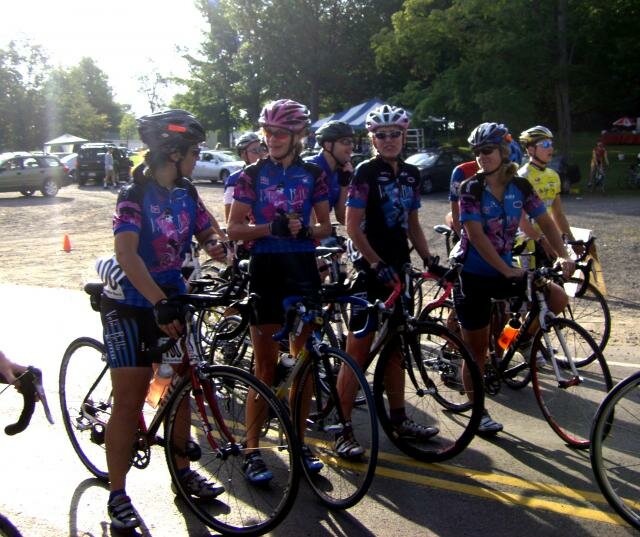 Linda, Laura and I were in the front pack and at about the 10 mile mark just made a turn and thankfully were not going really fast but heading into an uphill, Linda broke a spoke and it went into the guy’s bike in front of me. I heard it and saw his bike swerving and then he went down, I went over the top of him trying to keep my line and somehow landed upright on one foot with my bike in the air but saw the entire crash transpire and I just froze. I saw Linda moving off to the side of the road and Laura go down with everyone starting to pile up on and behind her and I just went into shock. I was so worried about Laura. My first crash! My friend Peter road past and yelled to keep riding. Thank god, because I was frozen so I tried to get on my bike and ride, took me a while to calm down and start breathing normal and about 5 minutes later I hear “Kitten Power. ” Whoopie, Laura is back.

That’s all I needed. We were back in the race and OK. Two other guys got through and we never saw anyone else from the crash after that. We never saw the peleton either and for the next 20 miles of rollers we had to work really hard but ended up finishing 1 hr 25 minutes and the peleton finished 1 hour 19 minutes. Laura took first woman and I came in right behind her. This was Laura’s first win and a big one. 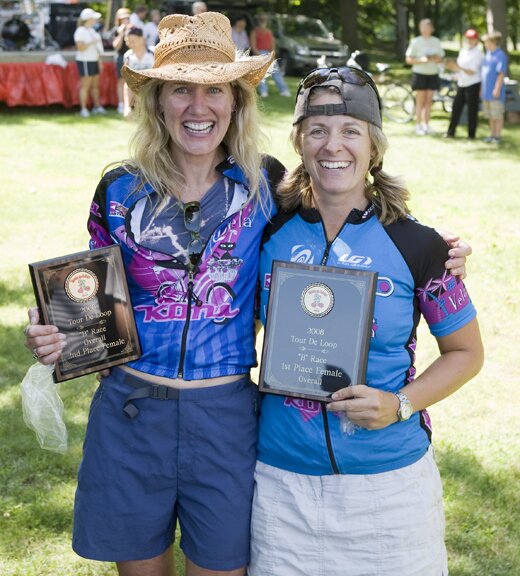 She has worked so hard this year and has made a major come back from surviving cancer in her leg and then from the radiation leading to a break in her femor and almost loosing her leg. She now has metal plates holding things together and is stronger than ever. This was really big in many ways for her. Linda had to drop out with her broken wheel. Lisa had a great race and and came in behind us with Michelle coming in behind her in her hot little black kitten kit.

It was a great day for most of the kittens, and we felt so bad for Linda because she was just sick about what happened out on the course but we got to experience our first crash and now I will know to just keep going if I can and not just stand there like a doofus. No one in the crash was hurt bad, just some scrapes and bruises and a few broke bike parts.

Off to Colorado to ride Mount Evans on Friday! Ouch.