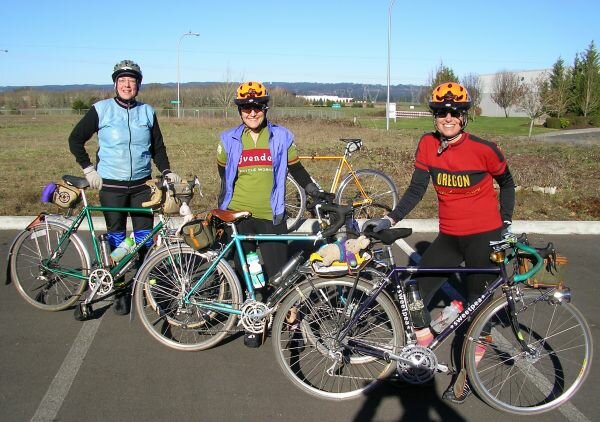 Beth and friends in Brevet gear, ready to ride

Inspired by the recent accomplishments of my friends Lynne and Cecil (who completed their R-12 in December — they rode a 200km brevet every month for 12 months in a row!), and wanting to enjoy a ride with them without killing myself, I suggested we put together a “shorter” route of 25 to 30 miles. I further suggested that since I’d shown Lynne and Cecil my Smith & Bybee Lakes loop already, that Lynne put together a West side route for us. I called it an Inspiration Ride, to honor my friends for their achievement and to inspire all of us to get out and enjoy riding more in the coming year. Lynne obliged with a beautiful countryside loop beginning and ending in Hillsboro.

It took about 90 minutes to get to Hillsboro from my house, including riding to MAX. We set out from Longbottoms Coffee, a favorite starting point for many Washington County bike riders, and within five miles had found our first (and it turned out, most significant) climb of the morning. Jackson Quarry Road was quiet and still, with many white patches of frost still on the road at 9:45 in the morning. It was a good workout, and the beginning of my being able to find my groove for the ride. Going down the other side of the hill was another story; I don’t care for rapid descents and this was pretty fast, but with some nice turns that broke things up a little.

By the time we’d ridden through the Jackson Quarry area, I’d warmed up quite a bit in my winter tights, two thin wool shirts and a heavy wool sweater, and a wind shell. I traded my heavy winter “lobster” gloves for ragg wool ones and shed the shell, which I didn’t need again the rest of the ride. My shoes had nylon booties over them and I had toe-clip covers too, so my toes never got uncomfortably cold.

Near North Plains, we encountered a group from Portland Velo, the other club that Cecil and Lynne hang out with. Almost entirely men, the group rode lighter bikes with narrower tires than ours; they looked like sleek stallions gearing up for the big breakaway. They passed us with care and a few friendly hellos. They turned one way and we turned the other at the “T” in the road after our Jackson Quarry climb. At length, one of their number caught up with us; he’d started the ride with Portland Velo but decided to hang with us awhile, preferring our gentler pace on his fixed-gear bike. Dan was charming and an easygoing companion and it was nice to meet him and talk about bikes with him as we rode.

On Mountaindale Road we began leapfrogging with another, larger group of riders, most of them wearing vivid kelly green and yellow team kits from Bike-n-Hike. There were quite a few younger riders in this group, some looking as young as pre-teens. They passed us in a large wave; a couple of rides at the rear of the pack seemed almost afraid to pass me and I waved them on with a smile. They disappeared almost out of sight. My knee was starting to bother me a little and I slowed to give myself a break, knowing that I’d catch up with Cecil and Lynne at the top of the next gentle climb. A few miles down the road, I was surprised to see the Bike-n-Hike group stopped, their numbers scattered so far out into the road that I was forced to cross the yellow center line to get around the group. As I passed, I slowed and called out that they should move over onto the shoulder more to be safe. They ignored me. As I rode on, Cecil circled back to complain to me about it. We both agreed it was stupid, and that the youngsters in the group were being taught a bad lesson. “Stuff like that is why Washington County can’t stand bicyclists!” Cecil exclaimed. A couple of miles later, rounding another bend in the road, we were overtaken by the team one last time, with their follow van cutting a very wide path around the three of us and crossing the center line of the road, though there was plenty of shoulder for riders and therefore no need for the van to cross the yellow line. I hoped they wouldn’t have an accident. At the intersection of Mountaindale and Dairy Creek (where I would normally turn onto Dairy Creek if this were the Snoozeville route), the Bike-n-Hike team turned right and we continued on Mountaindale. That was the last I saw of them.

Stretches of Mountaindale were absolutely bright and beautiful, with manure-covered fields glinting in the hard winter sunshine and the green hills in the distance losing their frost as the sun landed on them. 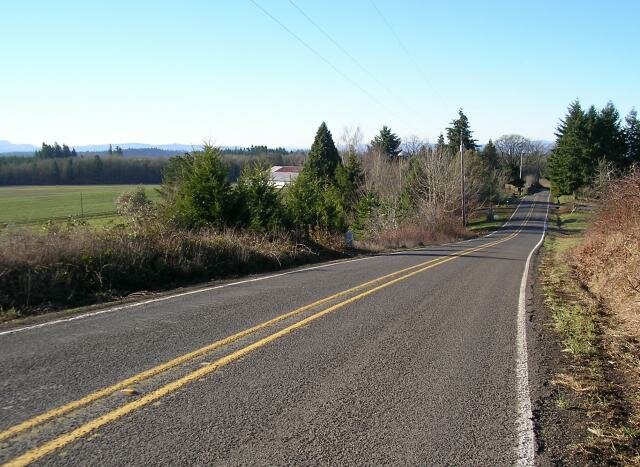 At length we crossed Sunset Highway and approached the tiny town of Roy. Church services were just getting out and Lynne mentioned that the church had a public restroom. We stopped to use it, refill our water bottles and adjust our clothing; by now the sun had warmed things up a lot. Cecil checked her thermometer (I think she had one in her phone or something) and announced that it was a balmy 50F. Arm warmers and middle layers came off, though I was comfrotable enough in my wool sweater that I just left everything alone. We were about 7 or 8 miles from the end of our ride and I saw no need to readjust much myself.

After leaving Roy we also left the bucolic countryside behind, riding through what quickly became a suburban subdivision and then over onto Evergreen parkway. By now both of my knees were hurting quite a lot, though I didn’t complain out loud. And my stomach began to feel queer. When we turned onto Evergreen we found ourselves riding into a light but steady headwind, and between that and the way I was feeling I could not keep up at Cecil and Lynne at all. I watched them shrink in the distance and decided not to worry too much about it; I knew where I was, had a cue sheet and knew that we were only about four miles away from the coffee shop. Then, I felt a wave of nausea overtake me, and I knew I had to stop and pull of the road for a minute. Last night’s raclette — did I mention we’d had friends over for a little raclette and fondue party? — caught up with me, and while it wasn’t terribly dramatic, it wasn’t exactly pretty either. I felt better right away, resumed pedaling and I found myself catching up with Cecil and Lynne, who had slowed when they didn’t see me behind them anymore. They patiently chatted while I collected myself, and then we set out at a much gentler pace for the last mile and a half to the coffee shop. (One of the things I enjoy about doing these more social rides with Lynne and Cecil is that, while they can totally kick my butt, they never make me feel bad about it. If we’re out for a social ride they are happy to ride with me, rather than race ahead as they would have to for a timed event. I greatly enjoy riding with them when there’s nothing at stake!)

There, we found Dan, who had regrouped with some of his Portland Velo buddies and was enjoying lunch. We did the same, though after feeling sick I opted for a simple bowl of oatmeal and some fruit. I felt much better after eating, though my knees hurt the whole way to the light rail and all the way home from Killingsworth Station. Still, it was a good ride with friends and I hope we’ll do it again soon.

Total including travel to and from ride: 41.57 miles.