Marian Explains How Not to Race Bikes

It’s just that I tend to break out in hives when exposed to too much toolbaggery. And, I don’t want to tell you how to race your bike, but……

Two main points on the Women’s 3/4 field at Poor Kids:
Firstly, if you’re on a team with the numbers, the right way to break up the race is to send someone up the road.

It is toolbaggery of epic proportions (and a clear violation of rule #1) to grab a fistful of brakes and then attack off the front. 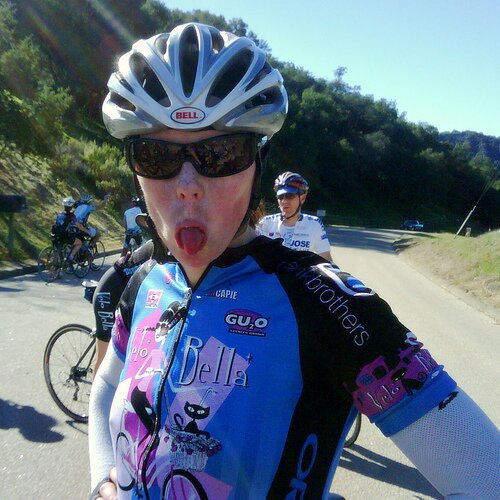 I don’t know where those women learned that nasty little trick, but where I come from we don’t cotton to such underhanded ways & I am certain that had they pulled that little toolbaggery move on a group ride they would have been ripped a new one in seconds.

That kind of toolbaggery move?
In a January race?
A race that means nothing?
In the women’s 3/4 field?

I suppose there’s some sort of explanation; maybe your mother didn’t breast feed you or you were the fat kid in 3rd grade or no one asked you to senior prom. But whatever the explaination is, get over it and/or leave your toolbaggery at home. Thanks in advance.

Secondly, I know that you’ve been told a million times: “Whatever you do, don’t ever pull. Don’t ever stick your nose in the wind.”

I hate to burst all your purty little bubbles, but if no one pulls, no one races.

It’s the wind, it won’t kill you so don’t be so scared. Don’t you sweethearts worry, there is an easy solution: one person rides in the wind. After x amount of time has passed they pull off the front, either to the left or to the right, & they drop back & fold back into the back off the group, resting after their pull in the wind. The person behind the first rider then rides in the wind for about the same amount of time.

Next thing you know, you’re clipping the miles away at a good speed & everyone has their turn in the wind so it’s all equal.