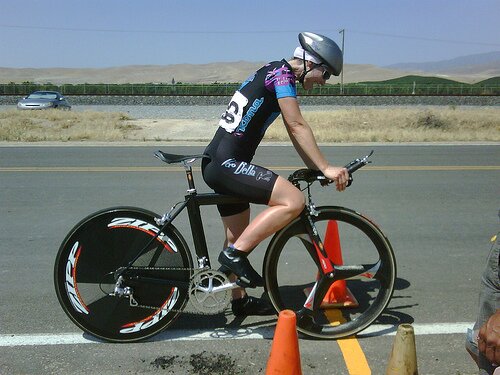 Stage 1 TT, warmed up well, which we had plenty of time for since our start time was about 2 hours later than we had anticipated. So lots of gabbing in the Bella tent and ordering the guys to pump tires, oil chains, check shifting etc. I was first off in my group, with a huge gap, so no rabbits to chase. I have to thank Karl at SVCC for doing a bit of an aero cleanup on my bike. Hammered my brains out, and did the 10 miles in 26:04. My perennial TT rival Dawn came over to me later and told me that I had smoked her by 50 seconds, which over this distance is huge.

Monica to Liz…the UCI is going to be knocking on your door. Ha!

Next day was a logistic nightmare, we headed out to Walker Basin for a circuit race, which my goal was to make back time, and help teammate Andi Mackie get some sprint bonuses, but not work too hard. Andi got 2nd and some time bonuses.

Then we sat around in the tent for a few hours, ate, told stories of bike gore and glory, then packed up to the next venue, a diablo-esque hillclimb. This stage really determines the race. I warmed up on the road for about 10 minutes, tried to stay out of the sun, and off we went. The first 3 miles were gentle climbing with a tailwind, so it was hot, then we made the turn to the hill proper.

I was near the front, and just paced off a couple skinny girls that I assumed were climbers, I just watched my heart rate and rode steady. I went around the skinny girls and eventually it got real quiet, and I realized I was alone. This was pretty early on, so I figured I better watch myself to not blow. I looked back and I saw some bright yellow, which I thought was the Southbay wheelmen girl, and I debated if I wanted to ride with her, or just keep on keepin on..finally I realized it was her husband (you know you have been out in the sun too long when you mistake a big guy for a teeny climber chick).

Passed mile markers, 2 feed zones including Michael (Hernandez) who yelled out “Don’t Bury Yourself” which I thought he was telling me to slow down. I was passing a lot of riders from other categories who were cheering me on. Finally after what seemed like the longest 1k I rolled over the finish line and ate watermelon. I was a full 4 minutes faster than the 2nd and 3rd place finishers.

I had 2+ minutes over these girls on the TT so as long as I didn’t crash (physically, physiologically or emotionally) in the RR I was all set for glory. Got back to the hotel about 8 PM. It was a long day.

4th and final stage, my plan was no flats, no crashes, and to help Andi. I had no reason to hammer, though the other girls kept waiting for me to attack, which I had no reason to do. Pretty much the group stayed together. Andi flatted right after the feed zone, but easily caught back on (luckily one of the team cars was at the feed with spare wheels, we had no follow vehicle). She caught on with no problem.

We did drop a few people on the climb but essentially stayed together, the last time through the feed Michael (I think that was him..) was holding up bottles and a wheel if Andi wanted her wheel back. In my overheated, fried state I found this funny. Final 1k climb we all pretty much stayed together till about 100m to go 2 people took off, I had Andi on my wheel, and she was 3rd, I was 4th.

Awards as always were fun. I especially love the t shirts, with Linda Locke and Andrea Atkins’ picture from last year.

Special and HUGE thanks to Mike, Rick, Tyler and Erika for taking care of all our needs, allowing us to boss you around, tending to logistics, and other miscellaneous duties too numerous to count!