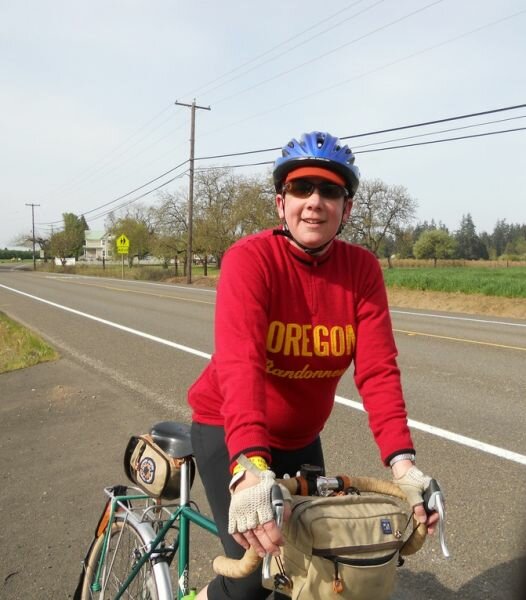 Pal Lynne had recommended the Monster Cookie Metric Century to me as a way for me to ride that distance this spring. When it became clear that Oregon Randonneurs wouldn’t offer an official populaire (100k brevet) until next fall, the Monster Cookie became pretty much my only option for an organized ride of that length.

When I say “organized ride”, let me emphasize that the Monster Cookie is NOT a populaire, NOT a randonnee, NOT a ride where one has to be self-sufficient to quite that degree. In this contest, “organized ride” means that there are sag and mechanical support vehicles, fully-stocked rest stops and a lunch stop that includes catered box lunches for riders who pre-registered (including me and Lynne). Having not done any ambitious riding other than a couple of St. Johns loops and a Rocky Butte climb over the winter, an “organized ride” turned out to have been a good choice for me.

We arrived at the state Capitol building and Lynne was amazed at how crowded it was at 8:00 am. There were easily two to three thousand cyclists lined up to get their packets and a couple hundred more lined up for same-day registration. By 8:40, after Lynne was accosted and greeted by a dozen or so of her Portland Velo buddies, we were off. We’d been given a cue sheet, but didn’t need it; the route was well-marked with painted symbols on the road and, well, there were so many participants that we were never actually alone on the road – for the entire day.

The route was a loop from the state Capitol to beautiful, historic Champoeg Park and back again, taking us through Salem suburbs and out into the gently rolling farmland of the Willamette Valley. The sun came out from behind the clouds and warmed things up quickly. I’d started the day in wool jersey, arm warmers, and my long-sleeved OrRando jersey as a sweater. I’d shed the long-sleeved jersey at the first rest stop, 15 miles in. As advertised, the rest stops for the Monster Cookie were well-stocked with good basic bike food: fruit, bagels with peanut butter and jelly, and, true to the ride’s name, lots of cookies. Along with the regular choices – chocolate chip, peanut butter and such – were Mexican wedding cookies (Lynne’s favorite) and coconut macaroons (which were basically small and densely packed coconut sugar-bombs). I ate two and stuffed two more in my jersey pocket for the road.

Rivendells besides ours were in evidence along the route, including this beautiful ’96 All-Rounder we admired at the first stop: 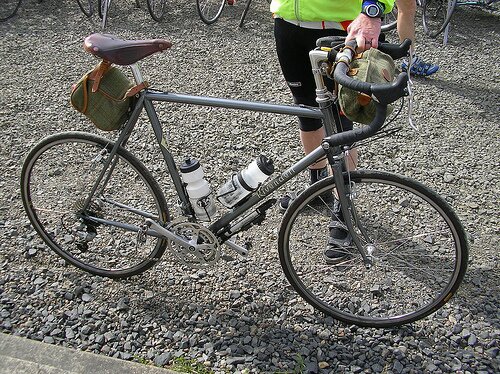 As we rolled along, admiring the rich green colors of the spring fields, faster riders passed us clad in jerseys from all over, including club jerseys from Oregon, Washington and northern California, indicating how popular this ride had become. Portland Velo, one of Oregon’s largest cycling clubs with nearly 500 members, was well represented with several groups passing us and shouting hello to Lynne as they did. Due to a bad winter flare-up, I was under-trained for this distance and focused on maintaining an even pace of around 12 mph. Lynne told me to let her know if we got too fast for my comfort. Mostly it was fine. I let Lynne know that I would probably deal with most of the uphills by sprinting up them so as not to lose momentum, and that she could pass me on the way back down (I love to climb but I’m not a confident descender). Lynne’s strength is not climbing (it’s endurance, and she can ride my butt into the ground) so she was fine with that suggestion. We leapfrogged each other over the gentle rollers that dotted the route, and continued our conversation when we’d caught up to each other again. Most of the time I fell behind Lynne but it was not a problem, and she patiently waited for me to catch up again.

We turned onto the familiar road that led us to Champoeg Park, our lunch stop. Pal Cecil, who’d been nursing an injured foot and had graduated from her walking boot a few weeks ago, had arranged to meet us at Champoeg for our lunch stop. She’d ridden there from her home in Portland, making for a round trip of about 50 miles. (Cecil doesn’t exactly over-train, she under-rests.) 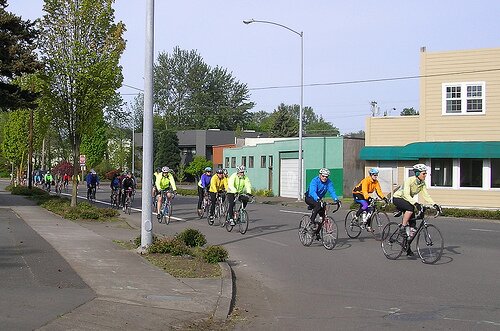 Lunch was catered for pre-registrants. My turkey sandwich was not bad, and a pile of potato chips and some fruit helped round out the meal. We sat on the grass in a sea of bikes and their colorfully-clad riders, chatting and joking with Cecil, who was in excellent spirits. After lunch, my knee-warmers came off; the temperature had warmed into the 60’s. We said goodbye to Cecil, who rode back to Portland. Although I’d been careful to stretch during the lunch stop, my legs still felt stiff and thick as we climbed the slope out of the park. I shed the arm-warmers soon after we were back on the road.

The 15 miles to the final rest stop passed without incident, though I did have to walk my bike up the steepest hill of the ride because by then I was getting quite tired. Lynne waited for me at the top, and greeted me with a smile. There is no shame in walking your bike up a hill, especially when you’re riding 62 miles in a day. We chatted and leapfrogged each other some more, with Lynne doing most of the riding at the front because I was getting more fatigued.

At the last snack stop (located at the church where the first stop had been), I refilled my water bottles, ate some more macaroons and fished around for the gel-blocks that had been part of my rider’s packet. I opened the packet and tried one, flavored “blueberry-pomegranate”, and immediately regretted it. It tasted hideous. I looked at the packet. It contained four gel blocks, labeled a “one day supply”. I can’t imagine living on a pack of these on a full-day ride. I gave the rest to Lynne and grabbed a couple more macaroons for the road.

The last twenty miles were tough. I was really fatigued by now, and even the bucolic rural scenery wasn’t enough to bolster my flagging legs, which had turned to rubber. I choked down a macaroon, gulped some water, and kept spinning. The only bright spot was that my trick knee hadn’t really 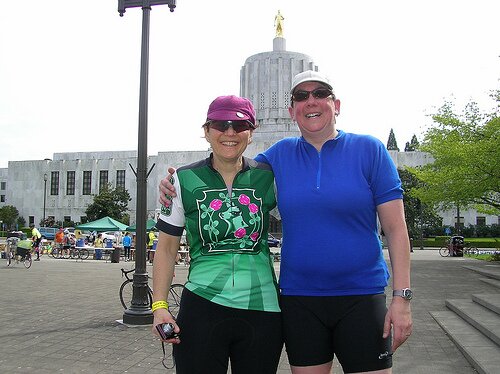 bothered me all day, except on the hill I’d had to walk up. The sun was beginning its descent in the late April sky, and the breeze from the river cooled me as we entered the suburbs of Keizer. In the heart of suburbia, on a street lined with neat, middle-class homes and trimmed lawns, we passed three girls staffing a lemonade stand. They called out in their best middle-school singsong, “Lemonade, all money goes to charity!” That was enough for us. Lynne did a quick U-turn, I followed, and I handed the girls a dollar bill for two glasses of cold lemonade. It was exactly what I needed with six miles and change left in the ride, and by the time we rolled into downtown Salem and the Capitol came into view, I was more than ready to get off my bike. After a bit of faffing, we were back in the van and heading home. We capped it off with dinner at County Cork before calling it a lovely day.