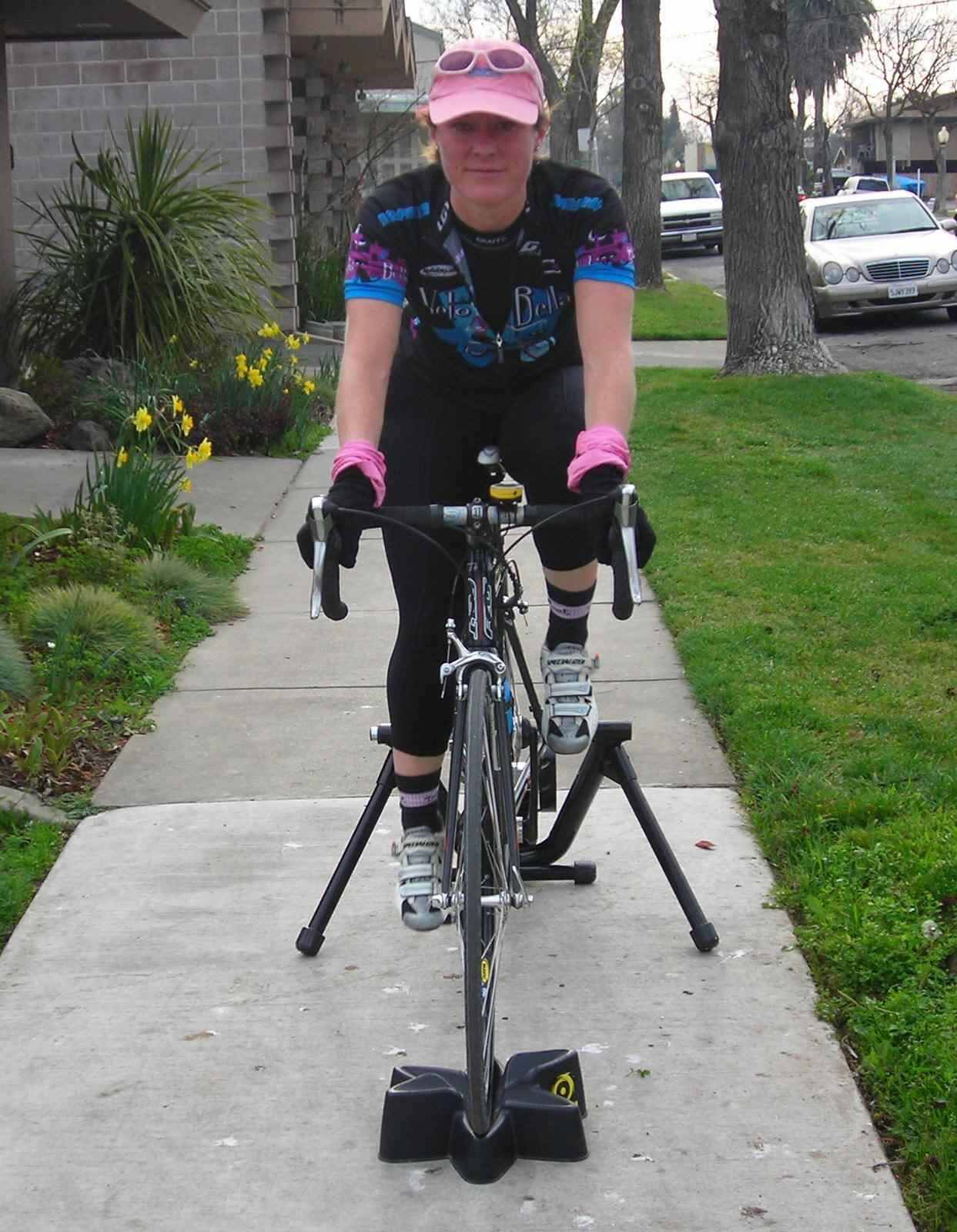 Dino and I left home around 5am for the two hour drive down 99. After checking in, I did the same hard warm-up on the trainer beforehand that I used before the Cal Aggie Crit. I used to be afraid of wasting my energy and tiring my legs out, but have learned that a good warm-up prepares the body for any hard efforts off the line. I saw bella-fella Tyler W. and he gave me a good talk through of the course.

It was my first time on the course and I was a little surprised that nobody wanted to do a free lap to inspect it. Was position that important with such wide open roads? I had no problem moving up quickly. It was easy to outmaneuver girls through the fun little schwoopy corners with barriers.

We had a good field of crafty 3/4 women and plenty of active teams. There was one obvious strength in a solo girl sponsored by Whole Foods. She was off the front and in front the whole time. I stayed right on her tail an tried to keep anything from getting away. In the first couple of laps I was stuck in 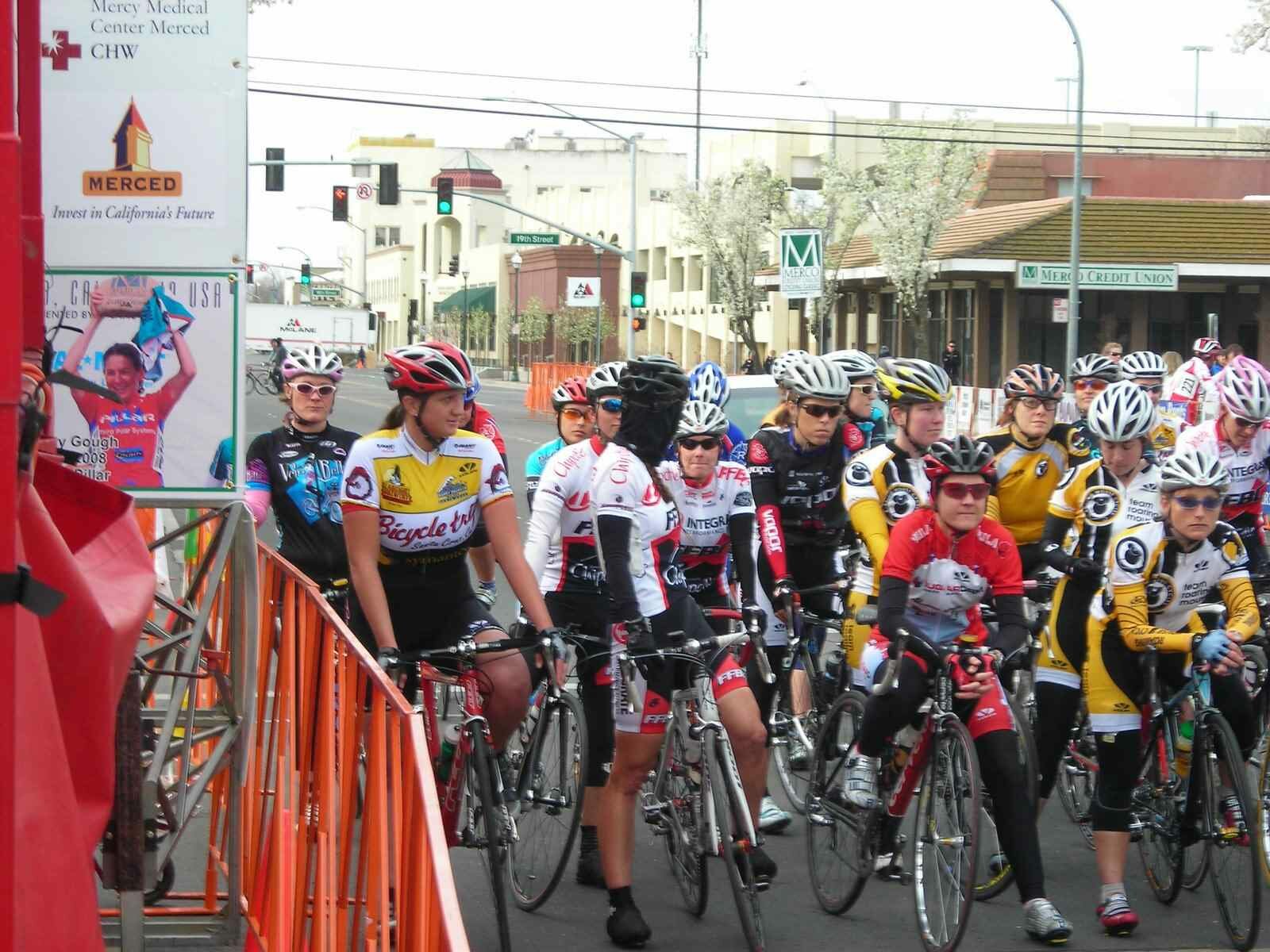 no-woman’s land after a prime sprint and I bridged up to the two girls in front. One of the girls wasn’t going to work with her teammates back in the field and we sat up. Attacks came from several different teams including Colavita and Roaring Mouse.

When it came down to the final lap, I maintained my good position. After the final corner several things happened in retrospect: I should have shifted to one harder gear and got out of the saddle, I waited too long before sprinting all out, and I should have let the teams do more work since I was solo. We were placed separately so I think I ended up 7th in the 3s (official results aren’t out yet). I got a little $ for lunch on the way home.

Despite that I am really happy with myself. I felt in control of the race and kept a really good position. I felt really strong (a good indication of things to come). The high end sprinting will come with spring/summer and track racing! It amazes me how far women’s racing has come in just the last couple of years. The speed and skill level has definitely increased. This is a race I want to do again.

Last Saturday was the first race of the season for me. I was much more mentally prepared than last year. Dino has been focusing my workouts on speed-work and convinced me to do a harder warm-up. It was nice to race later in the day with the 1/2/3’s. We had a nice little safe field of 26ish.

My teammate Soni and I spent the first lap up front at a reasonable pace. From there on, it’s like a song that got faster and louder. My old friend Mary (Vanderkitten) controlled a lot of the race– toying with us really. I watched her draw people out by hammering up front and getting a little gap, just watching who would follow. I tried to stay on her tail– She could have led me out for a prime but she was just too fast! It was suprising that she didn’t take it in the end. She ended up 2nd to Cal Aggie Amanda. Touchstone looked strong with Kelly and Carol contesting the prime sprints.

I ended up 10th place. I was very happy with that. Good times!

When Dino analyzed my power files later, I had gotten all personal bests (except for 1 second watts). He raised my threshold by 20 watts. A big jump! Amazing after being off my bike for a week with a stupid chest cold. It re-inspires me to work hard and look forward to a good season.