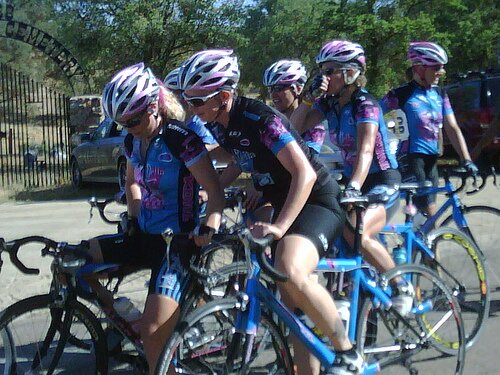 I went into the weekend with no expectations except to race my heart out for whatever Bella among us, was in the best position to win. I’ve watched the 35+ group of Bellas race with strategy and team tactics at Kern before. I was excited to play with them. And once again, they raced liked seasoned pros!

Check in time was 11:30-12:30 with starting times posted at 12:45. We figured we’d be going off around 1:30 but discovered actual starting times like 2:32 & 2:36 & 2:48 – so this began the first round of killing time, sitting under the pop-ups, avoiding the sun, resting your legs on ice chests, drinking as much fluid as possible – all of which was repeated over and over and over again before the weekend was finished.

I’ve always done TT’s by heart rate but when I took off and hit the start button I wasn’t in the right view. I spent the first 500m or so messing around with it to no success. Finally, I told myself %^$# it, just put your head down and go! Your legs will tell you whether you can do more or not.” I managed to pull out a half-way decent time and came out of it in 2nd place, only 23 seconds back. Sue and Stella weren’t too far behind me.

This race offers time bonuses each lap plus time bonuses for the finish. Our goal, as a team, was to get the stage win, keep first place from getting any bonuses and get as many bonuses as we could to move Sue up in GC. My job was to do nothing, sit in, if I could steal some bonuses without any big efforts go for it, but other than that do nothing. Sweet! I like this.

First lap was text book perfect, Linda and Andrea went off the front about 2.5 miles before the line to steal the bonus times. This same plan didn’t work so well as the others caught on to our tactics so we had to adjust. We made steady attacks to try and gobble up points, but our attacks were a little harder than needed and wore some people out. Stella, Linda, Laura, Sabine, everyone took turns playing (working).

Late in the race Sue popped a spoke. She told me to go to the front, slow things down so she could get a wheel change from the car. It was classic! I went up front and just started chatting with Janet, (girl who was in 1st in GC) As we talked I pedaled just a little bit softer, slowing the pace down as did Janet without even realizing it. Funny thing was, neither Janet nor her teammates ever looked back to see what was happening. Sue, Laura, Linda, Sabine were all back in no time!

As we approached the finish Sue and I whispered about who’s wheel to be on and where to be in the corner. As always the finish was a little dicey but I managed to get over the line in 2nd place. Best part was Janet didn’t get any time bonuses but her teammate Sonia scored several including the win.

This stage should really be called Hellish Hill Climb as I swear its hotter than hell and the climb is a bitch! Throw in a little headwind and WHOA…we got us a real gem.

We started out with Sonia and Janet tied for first in GC, me sitting 2 seconds back, Sue about 35 seconds behind that. Our game plan was for Sue and I to stay protected on the 2-3 mile lead into “the climb” then try to get away. If we can do anything to help each other great, if not remember it’s a drag race to the top. As soon as we started Bev Chaney the only non- Bella or non-pinkie in the field took off. No one responded. Bev is an accomplished mtn biker, not a real experienced road racer, and new to this event. The feeling among the team was that she wasn’t a threat for the long sustained effort this climb took.

As we turned into the climb the field quickly went down to Sue, Janet, and I. We passed Bev before long, she was mixed in with some of the Cat 4’s who started 2 min ahead of us. Sue and I were watching Janet to assess her status and we both felt like she was hurting. I felt great. I moved in front, tried to keep Sue protected.

Sue came up along side, gave me a look saying “ if you can go, go” I added a little more pressure to the pedals and soon found myself with a gap. When I saw Michael, Tyler, and Erika at about the halfway point I really began to think I could pull this thing out. I took all the water I could get, thrown on my back, over my head, I think Erika even just sprayed me all over – it was really refreshing. I ended up nailing this climb, giving myself close to a 3 min advantage on the field. Sue had a fantastic ride, coming in 2nd and putting about 30 seconds into Janet.

There’s a saying I’ve heard about Bakersfield – it’s not hell but you can see it from there. Well, Sunday we might’ve agreed with that. It was hot, really hot! Some say 108, with temps on the road of 114.

Going into the stage, I had 1st in GC with a 2:50 lead, Janet in 2nd, Sue in 3rd about 45 seconds behind Sue, and Sonia, Janet’s teammate about 1 minute behind Sue. Our goal for the stage, protect Sue’s and my GC standing, get the stage win and move Sue up if possible.

The first lap was very uneventful, almost boring. I sat on the back, just riding it out. I’ve never had this experience before. It was sweet, I was diggin’ it. I was also thinking, man when is something exciting going to happen, then boom – . Laura pops a spoke…uh, oh. No follow vehicle.

Laura, Sabine, and Linda do a quick check of who has Campy, who has Shimano and Linda gives me her wheel. Laura and Linda were so calm as we changed my wheel. They reminded me not to panic, you’ve got plenty of time. I told myself, “ just a controlled, concentrated effort, don’t blow your wad getting back, you have teammates up there, they’ll be controlling the pace. Stay within yourself.” Sabine was 1km or so up the road to ensure I was up and moving. I asked if she wanted me to keep her with me. She said, “No Monica just GO!”

I made contact with the group just at the base of the main climb and just like seasoned pros, Stella and Andrea were sitting on the front keeping the pinkies in line. Evidently, they did try to take advantage of my mishap but the girls shut them down. Sue kept giving me hand signals to remind me to take deep breaths, relax, and settle in. The pinkies let Stella set the pace up the climb which shocked me, as they had the perfect opportunity to make a move but nothing happened.

As we neared the long descent off Pine Mountain the pinkies started making their move to the front. I knew there was no way those girls could out ride Stella on a descent. I decided to take it easy down the hill as I had this borrowed wheel which was a sew up and I’ve never ridden one. Plus, I started thinking things like “ did we lock the skewer well? Is the wheel in there straight?” Andrea and Sue both checked to make sure I was ok.

At the bottom of the descent one of the pinkies took the lead and began setting the pace. You’d think they’d start trading pulls and showing signs of racing this thing to the finish but this didn’t happen. I told Sue I think they’d settled, they weren’t looking at anything but the stage results. There simply wasn’t enough time in the race left to make up 3 min.

This is when Sue started telling me she was cramping and not feeling so great. She asked me to keep a watch on the pace, don’t let it get too high so she doesn’t get dropped. Stella was covering the front with the three pinkies. As we made our way through the working descent before the final climb to the finish I moved up with Stella, filled her in on Sue and slowed things down. I kept looking around fully expecting the pinkies to jump but nope, nothing. Sue was sitting on my wheel reminding me to ease off when necessary, but showing no signs of distress.

We started going up with maybe 2km to the finish, Stella said “ you know if you can go, go. You’re the strongest one here, they’re not gonna do anything so go if you can go.”

When we got to the ridge where I could see the finish I put more pressure on my pedals, stayed seated and rode off. Sonia and Janet jumped and caught me. I sat up. I didn’t want them sitting on my wheel so we had a little cat fight.

Then Janet took the lead. I sat on her wheel, and we dropped Sonia. Janet was out of the saddle pulling me up with her. About 50m from the line I tried to get her, but didn’t have it. 2nd for me. Sonia, 3rd, with Sue and Stella rolling in right after. We hung onto our 1st and 3rd in GC for Sue and I.

Sorry for making this so long, but I wanted to share the team work that went into this win. All I did was ride a decent time trial and nail that hill climb it was what everyone else did that made the win happen. I’ve been trying to work today, you know like my real work, but I find myself overwhelmed by the weekend, the sacrifices made, the encouragement shared, the raw will and determination everyone had, it’s got me all verklempt. Thanks ladies, you’re all my heros, can’t wait ‘til next time!

Saying thank you doesn’t do justice for what Michael, Tyler, Erika and Rick did for us this weekend. You guys make us all feel like queens even tho, only Stella wears the tiara.