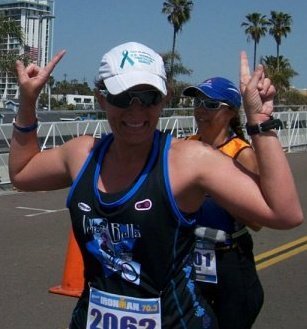 I participated in the inaugural Ironman St. George on May 1st.  I registered for this race almost a year ago, and had been nervous about it ever since.  It is a VERY, VERY hilly course, and I am not a climber by nature.  I trained like crazy, and on May 1st I knew that I was ready to race.

The swim was fantastic.  I was still on the shore, making my way to the water, when the cannon went off.  It ended up being a blessing.  I was able to find open water quickly, and didn’t get the crap beat out of me!  I felt strong.  All the work I’ had been doing on my stroke with Mickey Murad over the past few months paid off.  I had my best swim ever, and made it out of the water with a PR and feeling great.

The changing tent was packed with shivering women.  The water was cold, and it had taken it’s toll.  There were no volunteers able to help me (there are usually plenty), so I had to get changed on my own.  Harder than it sounds with numb and frozen hands, but I did it.  I ran through the bike lot, grabbed Big O, and hopped on.

I love being on my bike, and I had a blast once I started riding.  My legs felt great.  I had to keep reminding myself to slow down- that it was going to be a long day and if I was patient now it would pay off later.  The course was beautiful, and the volunteers and spectators were everywhere cheering.  I made it through the first loop feeling FANTASTIC.  I had done the math in my head, and knew that even if I slowed down on the second loop, I would make the bike cut off with over a half an hour to spare.  I KNEW that all the hill work I’d done over the past 4 months was really paying off.  Coming down the long decent at almost 50mph, I was elated!

At the bottom of the hills everyone had to slow down for a sharp right hand turn.  The corner was absolutely packed with spectators.  I feathered my brakes to make the turn.  Then- BAM!  My rear tire blew.

No problem.  I had plenty of time, and I can change tires pretty dang fast.  So I did.  No problem.

Roch Frey, who is a friend as well as the race director, just happened to be standing on the corner.  As I was getting back on the bike, he cheered me on.  Everything was fine.

I had barely clipped in when- BAM!  It blew again.

Roch ran over and said I probably had a pinch flat.  I didn’t think that was the case, but since I had tried to change it really fast it was possible.  He went through the tire, and couldn’t find anything.  We looked at the tube- big hole.  We looked at the other tube- big hole in the same spot.  We looked through the tire again.  Still couldn’t find the problem.  Roch started bending and moving the tire around and found it.  The tread and the side of the tire had separated about an inch.  The tire was unridable.

Roch called tech support to get a new tire.  She wasn’t too far away, but he said we could try to boot it to get me past the checkpoint.  I didn’t have a boot, so he pulled a $20 out of his wallet to use.  He had his assistant run back to the truck to get a pump.  When he got back, Roch pumped the tire up to 70 psi.  There really was no way this tire was going to hold.

He called tech again.  She was only about a mile away.  He told me to hang on.

The spectators were great.  There were a ton of folks watching all of this happen, and they were all rooting for me.  One woman offered me her chair while I waited.  Several others offered me food.  Everyone was so, so nice.  I looked at my clock and saw it was getting late.  I asked someone if I could use their phone to call my husband, Rob.  She kindly let me, and I was able to let him know I was fine, and not to worry.

The crowd cheered as I took off.  I was trying really, really hard not to cry.  At this point, I realized that I was in serious trouble.  I started doing the math in my head.  It didn’t look good.  The next cut off point was at the top of  the course.  I was going to have to average 15 mph up some serious inclines to make it happen.

I rolled on slowly, being careful not to go over any big bumps.  After a while tech support pulled up on her scooter.  She was great.  She told me I had a “guardian angel” and that Roch had been calling her repeatedly to come help me.  She looked at the tire and agreed that it was unridable.  She got another tire out of her supplies and changed it.  She wished me luck as I started riding again.

I was mad.  I pushed as hard as I could.  I was out of my saddle on every climb.  I did my very best, but it wasn’t enough.  I couldn’t make the cut off.

I can say with almost complete certainty that I was going to finish.  I was ready.  My legs felt great.  My nutrition was going perfectly.  If I hadn’t lost so much time, I would have easily made the cut offs.  I would have finished.

The good news is that I didn’t crash.  I didn’t bonk.  I feel fine.  I’m just really, really disappointed.

I have so many amazing friends who have been calling, texting, emailing, and posting on my Facebook page words of encouragement.  I am a very lucky girl.  Thank you all so, so much.

I’m doing Ironman Arizona again this November.  AND I’m doing St. George again next May.  It’s not over.

By: jen see ~ Filed Under reports, SoCal ~ · Leave a Comment 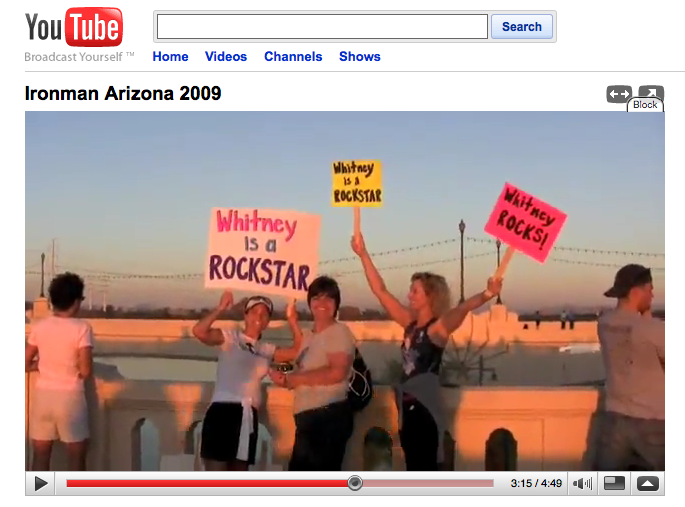 Velo Bella-Ellsworth triathlete Whitney Despain recently competed in the Arizona Ironman. A friend captured the day’s adventures on video. Head over to youtube and check out all the fun and suffering!