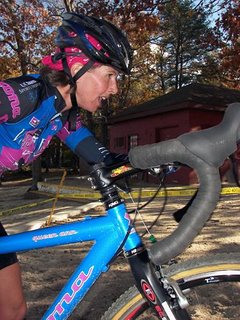 Arrival into Burssels through Jan. 13th

It has been a while since I have been at the computer typing but here goes. We arrived in Brussels the Friday before the Nommay race (Jan. 14th) only to find our bikes had not made the trip across the Atlantic. So, we headed to Izegem for the evening only to return to the airport the following day to find that our bikes still had not arrived.

Well, this was pretty much very disheartening. Rhonda and I were supposed to race the following day 5 hours away but we had no bikes. We went upstairs and down in the airport shuffling from one continental rep to the next with no one being able to really provide us with any optimistic advice and with one employee even replying, “ well, your bikes could be in Tokyo, we don’t know.” So, we headed back downstairs for one last stitch effort and as we are sitting there faces in our hands feeling pretty low, an angel of some human form comes in and says, “Mazza and Winfield, you are Mazza and Winfield, correct?” “Your bikes are right out there.” Woohoo, we offered our praises and off we went bikes in tow.

It was a great car ride to Nommay with Mark Matson (Kona Factory Team Wrench) burning up the highway. But, once there, we had no idea where exactly to go to get to the course and I think it took us almost as long to find the race venue as it did for us to get to Nommay. Nevertheless, we finally found the venue after a high speed chase of of the Hanka Kupfernagel’s support vehicle. Hey Alex! Where is MY support vehicle?

Unfortunately, we had no idea how to return to our hotel after all the twists and turns. This is where it got a little tricky b/c I only speak a little French and they only spoke a little English. My big concern at this point was getting back to the Hotel b/c my husband had flown into Switzerland earlier that day and was scheduled to arrive in Nommay around noon. It was now almost 7:00 p.m. We were a little behind schedule. I was able to get a ride back to the hotel with a very nice woman who was working at the venue and ironically enough, the hotel was only about 2 miles away. We had just taken a different route to get there that was much more confusing.

The day began with some chilly temps and some rain but soon warmed to a balmy 45 degrees or so. Perfect weather for cross. Seeing as we had just gotten our bikes built at 8:00 p.m. the night before and rode the trainer for about ½ an hour I was a little concerned about my ability to perform on Sunday. Rhonda and I warmed up on and off the course. I was psyched b/c it had been so long since I had raced. We line up and bam, the gun goes off.

The start was fairly smooth, a stretch of pavement into a 90 degree left turn where you had to dismount, run up the stairs, then immediately down the muddy descent, onto the gravel path then left turn into the muddy field around we go, ½ way up the hill, dismount, down, quick left turn (still not clipped in) oh, off the bike again, up the hill, back down the other side another quick left turn, again ½ way up the hill, off the bike, around to the left, this was a very hard area the ground was muddy and it was so easy to get bogged down but the legs felt good, off camber turn to the right, feeling good around the corner down the muddy descent onto the pavement and back at the start for the next lap. Lord, I’m tired just typing it out!

It was a good course and I was definitely struggling in some spots but was feeling good. I went down a couple laps into it b/c I tried to bunny hop the girl’s wheel that had gone down in front of me. Stupid, stupid! Then I had my pedal caught around the hose to wash the bikes (I mean what are the chances) so when I tried to go, I couldn’t. In retrospect it is pretty funny but I was cursing myself. Alll in all, I was pleased with my race and was looking forward to next weekend.

It hasn’t been all too snowy around here, which is great for biking… but it bums our bella skiiers out. And -of course- the bellas rawk on snow. Maria Stewart placed 2nd at the Capitol Square Sprints.

She’s got a race report over on skinnyski.

Sarah went bmx-ing.. she even posted to ze email list about it.

Anyways… here it is…

Last night I got talked into going up to Rehbein’s BMX Arena (aka The
Barn) to ride on the BMX track. Apparently not having a bike, helmet,
or money isn’t an issue or excuse. It was much more difficult and
intimidating than I expected. I went up there last weekend to just
watch and see what it is all about. It’s mostly kids, so I thought if
they could do it, I could do it too, right? A friend loaned me his BMX
bike, fully loaded with Spokey Dokes and a seat that was much too
high, but beggars can’t be choosers. I figured if a kid made fun of my
Spokey Dokes I would just tell him/her that no one likes them.

I lined up to the gate and the first thing I noticed is that the track
is a lot steeper than I thought it was. The gate went down and off I
went, eating the dust of children. I was really awkward on my bike
since I haven’t ridden a BMX bike since I was a kid, and it really
didn’t fit. I went up and down the hills, went around the burms
(banked corners) and finished out of breath. The second burm was the
hardest part of the course since it is a clock-wise turn which felt
really strange to me.

For the first hour I was really frustrated and discouraged and ready
to quit. Thankfully the guys I was with were really encouraging, gave
me helpful pointers and cheered me on throughout. Most importantly
they made me keep going around and not give up.

When I finally hit the second burm smoothly I knew I was improving and
actually wanted to keep going! I had a big smile on my face and only
stopped once to get a corn dog. I kept saying “one more time and I’m
done,” but I kept lining up to go again. Towards the end I even
started to get some air off the hills and beat a kid to the finish
(I’m a bully, I know).

I’m starting to look for a bike that fits me and plan to keep going
and hopefully improving as significantly as I did over the two hours
last night. I’m even planning on racing one of these weekends (they
award trophies)!

Let me know if you want to come out, it’s super fun and the more the
merrier! 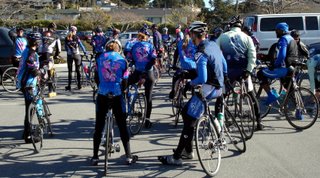 We rode, ate, and rode some more.

It was cold, but sunny, and the routes were beautiful (well, except for Sunday – sorry – there was nothing beautiful about Sunday). In terms of conversation, I think we did some real bonding:

Me: That is cold. That’s like, five jerseys and two pairs of shorts cold.

Silence as we watch our breath puff-puff through the air.

Teammate: That’s like, four jerseys and a vest and thermal leg warmers cold.

It’s 9:49 and we pull into the ride start parking lot.

Me: What is that, like a couple base layers and a thermal jersey and a jacket?

Teammate: Well, the other day when I left work it was 39 degrees and I wore this-this-and-that.

Me: Yeah but it’s one degree warmer now.

Teammate: Yeah but it’s not as windy.

Me: Yeah but we might have to go down some descents.

Teammate: Well I dunno, if you are then maybe I should.

Me: Well, I just thought if it gets warm I can always take them off.

Teammate: Oh. But what if it warms up a lot?

Me: I don’t know. Hey, it looks like teammate-over-there is wearing a thermal vest.

Teammate: Oh CRAP. I don’t have a thermal vest.

Me: Me neither. Maybe I could wear two normal vests?

By: admin ~ Filed Under Uncategorized ~ · 3 Comments

Yeah… the trainer ride was part baby shower… and that was full of “ooooo! cute!” as expected. But… let’s not forget… “oooo… SHINEY!… and cool..!” See.. in the back of the Arden Hills Now Fitness location, they’ve got Tacx trainer system, complete with big screen TV and virtual reality (haven’t heard that term since 1999, eh?) simulator hooked up. All of us got to try both the Real Life Video and the Virtual Reality Terrains. Both were wicked fun. The Real Life video definitely had the better graphics.. but it lacked the steering function that the Virtual Reality Terrain had.

I’m even pondering trying to sneak in early next trainer ride, so I can set -my- bike up on the trainer and hog it the WHOLE time.

Seriously, this could be a DDR-like addiction for bike geeks…

….The most fun you can have on a trainer…

First of all – I didn’t want to get my bike out, find my shoes (which
have been hibernating for weeks) pack up the car and drive in the
cold on Saturday morning, when I could be snuggly on the couch. But I
DID want to catch up with my Bella Friends, and work off some of that
icecream from the night before.

So with that said – it was well worth the little bit of effort that
it took to get to the trainer site. I think the girls would all
agree that we had a great time!!

The trainer session itself was kind of self-paced. At least for me
it was. You could sit and pedal and chat – like me. Or you could
really work it hard (like Barb, or Marjie, or Jen or just about
everyone – even Stacia!)

By the way, Stacia and her “Precious Cargo” looked great on the bike,
no complaints from either – she fared much MUCH better than I did
when I was preggo. Great Job Stacia!

And further – the young good looking staff at NOW were very helpful
getting us set up, directing us to the ladies room, etc. All the
pleasantries we Bellas deserve.

I would rate the trainer ride an A+! 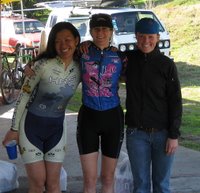