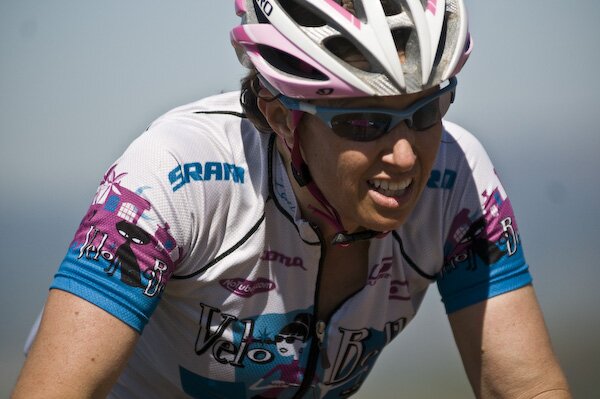 My hubby and I flew down again for Sea Otter, excited for the opportunity to thaw out after an especially long and cold winter here in the Northwest. Little did I know that not only would I thaw out, I would melt into one big pathetic whimpering puddle.

I knew it was an ominous sign when it was announced that the pro women would be reduced to one lap. Part of me was bummed–I prefer an endurance race–but I was relieved we would be out in the baking sun for less time. My husband looked as though he had been broiled after racing in the Cat 1 mens race that morning. I lined up feeling more than a little nervous. Due to our unusually high snowfall, I had only been on my mountain bike five times so far this year.

Because we were only doing one lap, the women in the front must have decided that meant we should just red line it the whole time because the pace was hard and fast from the start. About five minutes into the race, I saw one of the top racers off her bike and puking. “Hmmm…well..at least that’s not me…yet” was my thought. So I spent the rest of the race simply surviving the heat.

This was one of my first rides of the year without booties, leg warmers, winter gloves, beanies…you get the picture. And now I’m supposed to race in 95 degrees???? When I tried to push too hard, my body rebelled in a number of ways, so I rode as hard as I could, pushed the liquids, and finished the race in 39th place. I was just thankful to not be one of the racers taken away by ambulance. Also–it was my daughter’s 20th birthday!! How many of the women in the pro field could say that?? Anyway, I tried not to get too down on myself for the less than stellar result.

Sea Otter is a great time no matter what the weather or the results. Congrats to all our podium finishers and thank you to Sabine, Laura, Susie, and all the other ladies for being in the Bella tent complete with snacks and mojitos!!

One Response to “Feeling the Heat: Sea Otter XC”