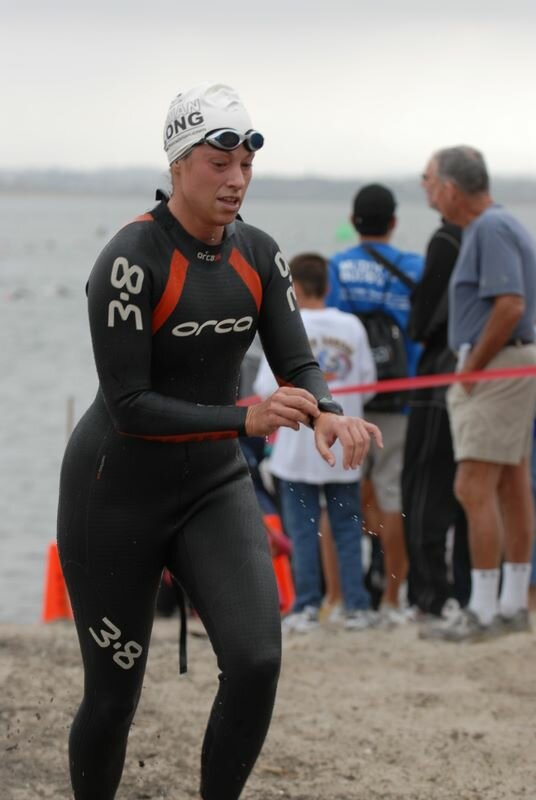 So it’s now nearly the end of April and my indeed season eyes-wide opener was back in March. The Superseal Olympic Distance triathlon is run in conjunction with the Superfrog Long Course triathlon. My husband had signed up for the long course – so a few of us thought we’d have fun with the early season race and do a relay. Not exactly a training race.. but one to just bring out some strengths and have fun. After all.. there was also prize money to be had…

So, Stacy Dietrich signed us up – Velo Bellas & Fella. Nick “The Dolphin” Abramson would swim the double loop beach entry/run swim course. His stellar 53 min Ironman Canada swim says it all. He has gills. I would do the bike. A 56 mile time trial of pure bella bellisma. The skin was going on, the aero helmet & the disk coming out to play. Of course Stacy did tell me I had to bike a sub 2:20 or she wasn’t going to do the run…. ’cause of course she would have to run a sub 1:45 half marathon… in deep sand.

Then… she found out she was prego. As ridiculously excited as I am that one of my best buds is having offspring… it now left a whole in our plan. So.. 2 weeks before the showdown I signed up for the full olympic distance Superseal.

My swim had been behind par due to an annoying shoulder injury, so I would only hope for the best I could do for the day. My biking has been feeling good. After the great Velo Bella cycling camp in January up in San Luis Obispo I felt like I could push it harder & longer than I had before. My run is coming along. I’m not a fabulous runner, so learning to suffer has been, well.. painful!

Last year’s race was cold, windy with ridiculous swells. This year, it was calm and overcast. I’d been told it was a fun race so I just figured I’d enjoy the adventure. Race reports are nice.. but the best part of the reports are the crazy thoughts that go through one’s mind when wondering why they paid money to feel like a bag of poo.

So, I survived the swim. Not horrible. “Could have been worse” I thought. Of course, friend Neily Mathias racing for GoMichellie.com (also wife of coach Peter Clode), finished the swim over 6 minutes in front of me. I’ve love to tell ya I was swimming backwards with my hands tied behind my back – but reality strikes… I’m no fish. No gills. In fact, when I take my goggles off, it ooks like I’ve been hit by a train. Positively the nastiest site for a Bella to behold. I’ve included a visual for posterity. Now.. Where’s my bike??!?

I had a good ride, but I must say, I liked my bike clock & my watch split better…. not sure where the 2 minutes went.. but both clocks posted a 1:07 n’change bike split. My official split 1:09:12. Needless to say, any sub 1:10 split at this time of year is a decent split. In any case, it felt pretty solid, so no real complaints.

I hadn’t done much in the way of brick training this year. For non-tri-geeks, that’s a workout where you bike, run, bike, run until your legs are mush. If aliens had landed during a brick workout.. I can only imagine they’d go home because clearly we’re a self torturing species. But when you hit sand on the run.. you’re wishing you did more bricks. I opted instead to go off-road and run on top of the ice plant. Not something I’ve tried before… and not sure I’d recommend it either…

I’ve got just over a half mile to go, and I get run down. Shannon Harris pulls up along side of me and she’s looking good. Good rhythm & pace and she’s outpacing me big time. “Please tell me you’re in a different age group” I said in whatever voice I had left. “33”. “Oh shit”. It went something like that.
I must say, Shannon gets the best sportsmanship award. She voluntarily carried me to the finish. She kept up her pace and I just tried to speed up to hang with her. “Let’s work together” she said. That kind of sportsmanship – For a split second I wanted her to beat me. She deserved it.

Then I realized I was in fact racing.. and if she was going to out run me, she’d have to do it to the line. A little tactics came into action. If I could draft off her run, in the chute maybe I could out sprint her to the finish. I wasn’t going to out run her. Not today at least. We rounded the nearly 180 degree turn with about 200 meters to go neck and neck. As the lane bottle-necked, I inadvertently bumped into the flying elbow of a man reaching for the finish as well. She went to his right, me to his left, nearly tripping over a land cone. And let’s just say 3’s a crowd. I hit it and hoped I had enough in the tank to fuel it to the end. I put 2 seconds on her. Once we crossed the finish line we congratulated each other on a good race. We finished 1st & 2nd. She just oozes Bella vibes.

So just as there are rock stars like Shannon Harris, there are also rotten bastards. After crossing the finish line another 10 seconds or so back, this man who I inadvertently bumped elbows while entering the chute, rams into me as I’m standing there drinking some needed water. “Dude, the race is over” I said. A lady walked up to me with her child and asked, “did he just do that on purpose?!?” Yes maam, he did.

I think the entire point of this race report is about sportsmanship. It’s ok to be competitive, to challenge each other. Nobody is out here to “get you”. It’s your own race. As refreshing as it was to race with someone like Shannon, it was also as upsetting to know that there are jerks out there that feel they are more deserving than others by instigating physical contact. Not nice. He goes on the Bella poo list.

Race to the best you can do that day. I had a decent race, but it wasn’t spectacular. I’m not a pro. I have a job that consumes more time than I’d like to admit. I have a husband and friends. I got a bit lucky all the really fast girls were not in my age group. Sometimes it’s a bit of talent. Sometimes a bit of tactics. Sometimes a bit of luck. It is however all about who shows up on that day to race. Yourself included. Race to have fun, to accomplish something, to improve yourself. Otherwise, don’t race. Nobody likes the attitude. After all.. you paid money to be here.. so you’d better get your monies worth of enjoyment.

In the meantime, train hard and race to have fun!