Winds Over My Hammy

This weekend was like your very favorite sandwich stacked high between two pieces of moldy bread.

Destination: Windham, NY
Purpose: Regain some ground on the season by landing a top 5 spot in the National downhill event

Thursday night my friend Shawnee and I drove the short distance to our rented condo near Windham resort where the other six occupants would arrive at various times throughout the night and early morning.

Friday morning started with a leisurely breakfast, a logging in to do a bit of work, and then heading over to the venue to register and for our scheduled afternoon practice. Omen number one: No other pros were there registering or waiting in line for Cat 1 practice to end. DAMN! The schedule had been changed to an every-catagory-for-themselves all-day conglomeration. I now had exactly one hour in which to get my bearings started on the course.

This wasn’t that big of a deal. I had seen the new features at the end of the course, a wooden drop and two large doubles, and as I watched the guys roll the first double, coast, pedal then sail effortlessly over the last set, I figured I’d probably just roll them at first and check them out like I normally do. After all, they were nothing to be scared of.

I knew the course pretty well already. The first section was from last year’s national course, and the middle to bottom were from the Gravity East event earlier in the year, minus the foot of mud that covered it then.

On my first run down I swooped and pumped the fun stuff then stopped and hiked section by section to re-run it smoother and faster. The course was phenomenal. Every part of it was fun, well maintained and manageable, however at race speed is when it started getting tricky and demanding respect. I rolled down the wooden ramp as I always do on a first inspection run, hit the last berm towards the two finish doubles then rolled the first set easily. It was at this point that my head went straight up my ass.

I don’t know what made me do it. In ten years of racing, I have never hit something without scrutinizing it first. Well, there’s a first time for everything. I figured I’d coast, then take some hard pedals to the last set of doubles. To say that I was surprised when I got to the larger-than-anticipated lip and further-than-anticipated gap is an understatement. To my horror I was going much too slow to clear it, much too fast to slam on the brakes, but juuust the right speed to pack my front end into the front of the transition. KA-LUNK…KAPOI.I.I.I.NG!!!! I’da pulled it off, too…if it weren’t for the fact my visor hooked a brake cable and basically attached my head to the handlebars. (Feel free to laugh; I cannot imagine how ridiculous this looked)

I remember thinking, “Whoa! I’m gonna pull it off! Oh no…SHIT! My head’s stuck!” At that point I tried to jerk my head up, which wrenched the front wheel sideways and bucked me straight over onto my right side noggin first.

I remember hearing birds tweet and seeing stars circling as I picked myself up, dragged to the grass, dropped everything I was carrying and stumbled immediately to first-aid. (At this point I’d like to say thanks to Joanna, Sue, Lauren and anyone else who might have come in to check on me while I was having a nice little chat about head trauma with Ron the medic. They sent me on my way. Obviously, that was the end of my practice for the day, so I walked the course later instead. I’m really not sure how beneficial that was since I was suffering from a bit of random memory loss that night.

Saturday through qualifying Sunday was a delightful mix of friends, swimming, BBQing and having a great time riding the racecourse. I took one practice run on Sunday and was ready to go.

My qualifying run went pretty well up until the lone muddy section. I hit every line I wanted to and paid attention to where I could hold more speed and where I needed to brake in my race run. I was having a good ol’ time laughing and whooping it up along with those on the side of the course, then I heard Sue cheering and ringing her cowbell. Maybe I just tried to come in to fast, but for whatever reason I tapped the brakes and my tires slipped right out from under me. The cheering stopped. I looked up, saw Sue, couldn’t help but laugh as I quickly picked my bike up and got going again, “Hey! I never practiced falling here!” I rolled both sets of doubles this time and crossed the line in 4th behind Joanna Petterson, Darian Harvey and Dawn Bourque. Respectable, but I could definitely shave some time off my race run.

Five – hours – later. We waited and waited and waited. Finally our scheduled 3PM start arrived. This was it. I felt good. I was going to redeem myself from nearly a summer’s worth of result-bummery. I had a good start out of the gate, down the chutes and across the grass. I dove into the first rocky section. CLANK! *rattle*rattle*rattle* The rattling turned to grinding, the grinding turned to only being able to ratchet the pedals to get just a little bit of power from the chain. Pretty soon there was nothing but the momentum I had and could gain from pumping anything I could. I hit the wooden drop and pumped through the last berm. My eyes were set on the first double and suddenly I was skidding in the grass and slid out. My rear wheel had totally locked up. What else is there to do but pick up the pieces and run like hell to the finish?

So, I finished. And to quote one of the all time best movies ever, “And when they pulled his body from the twisted, burning wreck, it looked like… THIS!!!!” 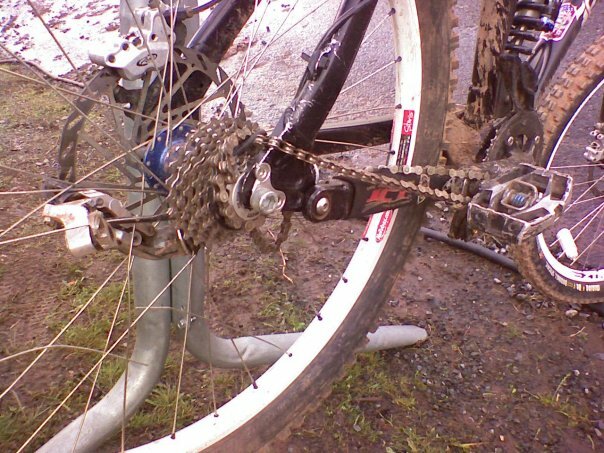 My qualifying time would have put me on the podium, so I can’t really be all that upset. I’m still up there. The Dare rode like a champ and was insanely efficient. Time to rebuild and get back on the horse. There’s still a lot of riding left this year!